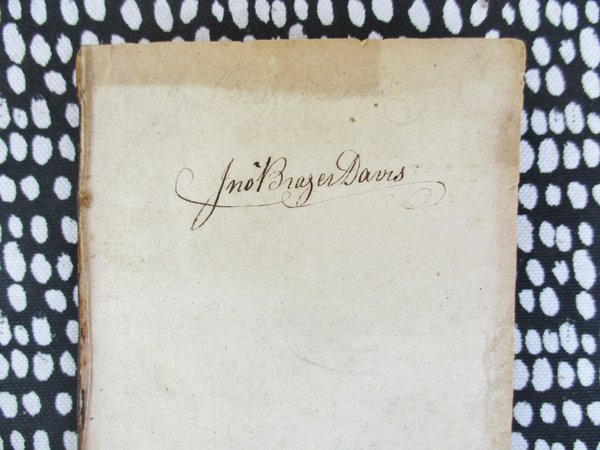 Georgii Buchanani Scoti, POETARUM SUI SECULI FACILE PRINCIPIS, Paraphrasis Psalmorum Davidis Poetica. Ad Optimam Editionem Thomae Ruddimani, A.M. Summo Studio Recognita et Castigata. Praemissa Est Accuratior Quam Antehac Carminum Explicatio. EDINBURGH : Excudebat C. Stewart, Academiae Typographus, Apud Mondell, Doig & Stevenson, 1807. Small Format Hardcover Book, leather covered boards that are DETACHED but present, 3.5x5.5 inches, xiv + 234 pages, plus 2 pages of Publisher's ads at the rear. In LATIN. The book is a POETIC LATIN REPHRASING / PARAPHRASING of the PSALMS by the great SCOTTISH Latin Scholar and Poet GEORGE BUCHANAN. ASSOCIATION COPY. The book has two interesting associations: (1) There is a signature on the title page of (?) BRAZER DAVIS. The question mark is because I cannot make out the first word, perhaps it is a first name or a military rank? There is a lot of historical information about a John Brazer Davis, also known as Colonel John Brazer Davis, an early American military man who is even mentioned several times in the memoirs of John Adams. Is this him? I do not know because, though Brazer Davis is written neatly and clearly, the word or title preceding Brazer Davis does not look like John or like Colonel, nor does it look like anything that I can figure out. (2) The book was deaccessioned from the Tufts College Library, and there is a printed signed note laid in that states the book was a gift of REV. CONVERS FRANCIS of CAMBRIDGE and was donated by him in 1861. The slip has his signature. Looking into both Convers Francis and John Brazer Davis one finds that they are often mentioned as being in the same fraternities and organizations at the same time, which is interesting. I HAVE PROVIDED IMAGES of the SIGNATURE THAT IS ON THE TITLE PAGE and of the laid in DONATION SLIP so that you can determine for yourself if the associations hold water or not. You can find information about both John Brazer Davis and Rev. Convers Francis on the Internet. CONDITION: Disbound Covers, as noted above; there are some library markings, including withdrawn stamps, here and there; there are relevant handwritten pencil notes in the margins and among the text, most are light and hard to read; there is offsetting to the margins of the first and last few pages; the first few pages have some water staining to the bottom margin; overall the inner pages are complete, remain nicely bound together, and have printing that is bright and clear. A very suitable copy for rebinding, should you desire to do so. About the author GEORGE BUCHANAN (from Wikipedia): ****** George Buchanan, b. 1506 d. 1582, was a Scottish historian and humanist scholar. According to historian Keith Brown, Buchanan was "the most profound intellectual sixteenth century Scotland produced." His ideology of resistance to royal usurpation gained widespread acceptance during the Scottish Reformation. Brown says the ease with which King James VII was deposed in 1689 shows the power of Buchanan's ideas. For mastery of the Latin language, Buchanan has seldom been surpassed by any modern writer. His style is not rigidly modelled on that of any classical author, but has a freshness and elasticity of its own. Hugh Trevor-Roper called him "by universal consent, the greatest Latin writer, whether in prose or in verse, in sixteenth century Europe". He wrote Latin as if it were his mother tongue. Buchanan also had a rich vein of poetical feeling, and much originality of thought. His translations of the Psalms and of the Greek plays are more than mere versions; his two tragedies, Baptistes and Jephthes, enjoyed a European reputation for academic excellence. His Pompae verses were written for performance at the court entertainments of Mary, including the Offering of the Rustic Gods sung during a masque devised by Bastian Pagez for the baptism of King James.******