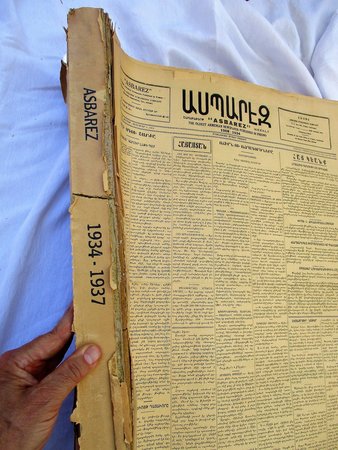 ASBAREZ ARMENIAN NEWSPAPER. Published Weekly, Every Friday, in FRESNO, CALIFORNIA. Entirely in ARMENIAN (with a bit of English titling on the First Page Publisher's Banner). A nice run of issues for the years 1934, 1935, 1936 and 1937, bound together. Approximately 200 weekly issues. The January 1934 issues and the February 2, 1934 issue (6 issues) are lacking, the first issue is February 9, 1934 and then the issues run consecutively through the December 31, 1937 issue. Please Note:

I have not counted every issue, but this is a weekly and unless a few are missing that I have not noticed, that would mean there are at least 200 issues. The issues are LARGE BROADSHEET FORMAT, with the pages measuring approximately 18x24 inches (46x61 cm). The issues have 4 pages. Therefore this bound set has approximately 800 large format pages. In the early 20th century, the FRESNO ARMENIAN community was the largest such community in California, and perhaps the entire U.S. These papers report on numerous issues of importance to Armenians, including International and California matters. CONDITION: The issues were bound in plain paper covers, but the covers are now completely missing with only a small remnant hanging on the rear, i.e. no covers. The spine covering has been mostly chipped off, but the titling remains. The newspapers are printed on fragile paper, and tear and shed easily. The last few pages are ragged with lots of tears, pieces missing, and creases, especially at their bottom halves; the first three issues are loose but present (Feb. 9, Feb. 16, Feb.23). Some issues have long tears across their center folds, but the issues are still complete. Most issues have some edge wear, including edge tears, chips, and general wear, but the text is almost always complete. The issues are age toned as normal. Nonetheless, most of the issues remain solid and are in generally good condition, especially given the fragile nature of the paper. The pages need to be opened and handled with care, even so expect some shedding. These newspaper issues were presumably bound together by the CALIFORNIA STATE LIBRARY. There are California State Library stamps here and there throughout. About the ASBAREZ ARMENIAN NEWSPAPER (from Wikipedia): ******The ASBAREZ ARMENIAN NEWSPAPER BEGAN PUBLICATION IN 1908 IN FRESNO, CALIFORNIA. In its early years the paper was published weekly. It eventually, decades later (1960s?), moved to Southern California when a large Armenian American community emerged there. ORIGINALLY AN ALL ARMENIAN NEWSPAPER, a regular English section was added in 1970.****** About ARMENIANS IN FRESNO, CALIFORNIA (from Wikipedia): ******The first Armenians to move to Fresno were the brothers Hagop and Garabed Seropian, who arrived in 1881. By 1894 the Armenian population in Fresno was 360, a number which grew rapidly with the onset of the Hamidian Massacres in 1895-96. During and after the genocide even more Armenians came until the restrictions on immigration in 1921 and 1924 brought this to a virtual end. Los Angeles also became a focus of Armenian immigration, and some Armenians from Fresno moved there as well. The number of Armenians in LA surpassed those in Fresno in 1930, partly because of the agricultural depression in the valley during the 1920s. The early immigrants were primarily involved with farming and agriculture. By 1930 Armenians owned 40% of the raisin acreage in Fresno County. Bigotry against Armenians was common. Fear of Armenian land ownership caused the passage of laws restricting their rights to freely buy land. This attitude towards the tight knit Armenian community led some to try to assimilate, while having the opposite effect on others. Today, the number of Armenians in the greater Fresno region is thought to number approximately 25,000.****** INTERNATIONAL BUYERS PLEASE NOTE: This collection of Armenian Language Newspapers is very large and very heavy and will require substantial additional shipping charges.