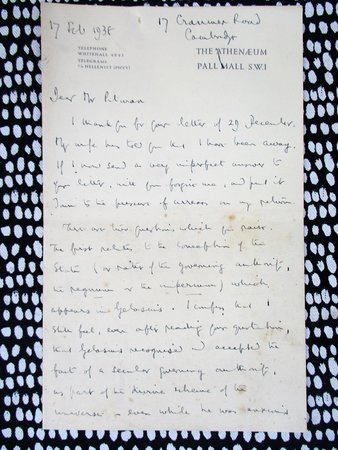 Four Page Handwritten Letter by SIR ERNEST BARKER, mostly a Critique of the book The Mind of Latin Christendom, by Edward Pickman (Published by Oxford, 1937). The letter is dated 17 Feb 1938. The letter is addressed to Mr. Pitman, a misspelling of Pickman. Though the book The Mind of Latin Christendom is not mentioned by name, this letter was part of a gathering of letters that Edward Pickman had amassed in response to his sending out his book for criticism to many of his friends and colleagues, and the subject matter clearly references his book. Written on a single fold sheet, 4 pages with letterhead on the first page, 5x8 inches. GOOD condition, a fold where the letter was folded to fit into an envelope (no envelope is present), the imprint of a paperclip to the top edge, some light spotting. About SIR ERNEST BARKER (from Wikipedia): ******Sir Ernest Barker, b. 1874 d. 1960, was an English political scientist who served as Principal of King's College London from 1920 to 1927. He was a don at Oxford, and spent a brief time at the London School of Economics. He was Principal of King's College London from 1920 to 1927, and subsequently became Professor of Political Science in the University of Cambridge in 1928, being the first holder of the chair endowed by the Rockefeller Foundation. In June 1936 he was elected to serve on the Liberal Party Council. He was knighted in 1944. He was elected a Foreign Honorary Member of the American Academy of Arts and Sciences in 1958. There is a memorial stone to him in St Botolph's Church, Cambridge.******