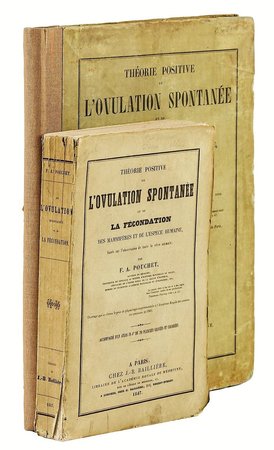 (Félix Archimède Pouchet). (English Translation: PROVEN THEORY of SPONTANEOUS OVULATION and FERTILIZATION of MAMMALS and the HUMAN SPECIES, Based on the Observation of the entire Animal Series. By F. A. POUCHET.) Published by Chez J.-B. Bailliere, Libraire de L'Académie Royale de Medecine, PARIS, 1847. First Edition. TEXT IN FRENCH. Two Volumes: The TEXT VOLUME plus the Especially Rare ATLAS VOLUME that contains 20 HAND COLORED PLATES. TEXT VOLUME: Original printed wrappers, 5.5x9 inches (14x22.5 cm), 8vo. Pagination: xxxi, [1], 476, [1] fold open table, [3], 28 irregularly numbered Publisher's advertisement pages. ATLAS VOLUME: Hardcovers, original printed paper covered boards and cloth covered spine, large format 9x12 inches (23x30cm). Contains TWENTY HAND COLORED PLATES, one folding, all with tissue guards. CONDITION: Text Volume GOOD Condition: Some wear and soiling to wrappers including several inches of splitting at the spine folds, wear to the spine ends, and edge wear including some small chips. Internally, the front and rear endpapers are mostly glued to the inside front and rear covers; there is some scattered foxing though most pages are bright and white; many pages are still uncut / unopened. Overall a solid, complete copy with original wrappers. Atlas Volume VERY GOOD Condition: The covers spine has been neatly rebacked with cloth; the covers have some soiling, light staining, and edge wear, but remain solid and are doing their job well; there are two rubber ink stamps on the title page "Property of the N. York Hospital" and "Triplicate"; there are creases and a few tears to some of the tissue guards; otherwise tight, bright, clean, clear and unmarked. The plates are all lovely. (Note: The New York Hospital, whose rubber ink stamp is on the title page of the Atlas volume, was founded in 1771 with a charter from King George III. It is the second oldest hospital in New York City, and the third oldest in the United States.) This Two Volume 1847 First Edition Set with the ORIGINAL ATLAS with its 20 HAND COLORED PLATES is SCARCE. About FÉLIX-ARCHIMÈDE POUCHET (from Wikipedia): ******Félix Archimède Pouchet (b. 1800 d. 1872) was a French naturalist and a LEADING PROPONENT of the SPONTANEOUS GENERATION of LIFE from

NON LIVING MATERIALS, and as such an opponent of Louis Pasteur's germ theory. From 1828 he was director of the Rouen Jardin des Plantes. In 1838 he became professor at the School of Medicine at Rouen. In 1847, Pouchet effectively launched the study of the physiology of cytology. His major scientific work Hétérogénie was published in 1859. He also wrote a layperson's encyclopedia The Universe, published in 1870, which gives an overview of the sciences, but in which Pouchet ridicules Louis Pasteur's theories. Pouchet was 60 years old while Louis Pasteur was 37 years old when the heart of the debate about spontaneous generation began. Their opinions on generation originated from two competing theories. Pouchet believed in HETEROGENESIS, which assumed that NEW LIVING ORGANISMS CAME FROM INANIMATE OBJECTS, SUCH AS AIR. The parents of these new organisms were not the same species as the new organism. Pasteur supported the germ theory that said microorganisms arose from germs and those microorganisms came from parents of the same species. He supported the idea that germs were mostly everywhere, including things like air and those germs explained the appearance of microorganisms on different inanimate things.****** You can read much more about Félix-Archimède Pouchet on Wikipedia and elsewhere on the Internet. I believe this is the perfect time to bring the SPONTANEOUS GENERATION OF LIFE theory back to life, given our ruling government no longer believes in real science.