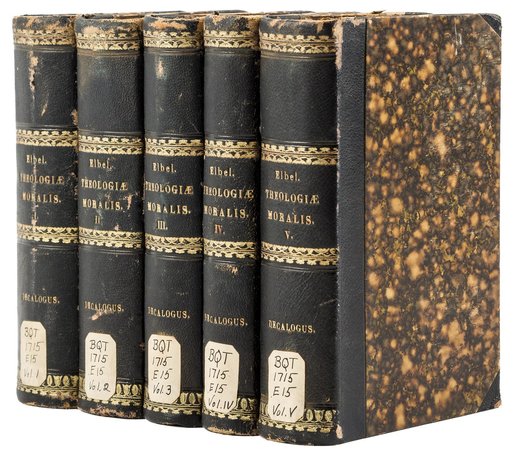 Vols. 8 and 10 with engraved frontispiece, vol. 10 with fold-out diagram.

THIS 10 VOLUME SET was deaccessioned from the Library of MOUNT ST. ALPHONSUS SEMINARY, ESOPUS, New York.

CONDITION: Ex the Seminary Library, as noted above, with library labels at heels of spines, library labels and marks on preliminary pages, and library pockets with cards affixed to rear endpapers. Ex lib aside, the covers have rubs and scrapes but remain sturdy and attractive; internally, there is some light toning and foxing, there are some early previous owners signatures, notes and marks; overall the pages remain tight, bright, clean and clear. A solid, nice, presentable, ten volume set.

Usually only found in single volumes, this 10 volume set is SCARCE

About BENJAMIN ELBEL (from Wikipedia):

******Benjamin Elbel (b. 1690 d. 1756) was a German Franciscan moral theologian. Elbel was born at Friedberg, Bavaria. He belonged to the Strasburg Franciscan province, was lector of theology, and held high positions in the order. He died at Soflingen. His major work, THEOLOGIA MORALIS DECALOGALIS ET SACRAMENTALIS passed rapidly through several editions. Elbel advocated probabilism. He applied abstract principles to strikingly practical cases, and his approach proved influential.******

About MOUNT ST. ALPHONSUS SEMINARY, previous owner of these books (from Wikipedia):

******Mount St. Alphonsus Seminary, located in Esopus, New York, was an American Roman Catholic seminary founded in 1907 by the Congregation of the Most Holy Redeemer, more commonly known as the Redemptorist Fathers and Brothers. It operated as a seminary until 1985, after which it became a center for meetings and spiritual retreats for the people of the Hudson Valley in New York. In 2012 the Mount ceased operations.******

INTERNATIONAL BUYERS PLEASE NOTE: This 10 volume set will be heavy to ship and will require substantial additional shipping charges. After placing your order you will be notified of the additional charges and be able to accept or reject them before your payment is processed. Or you can contact me ahead of time to find out the shipping charge to your country. Thanks.