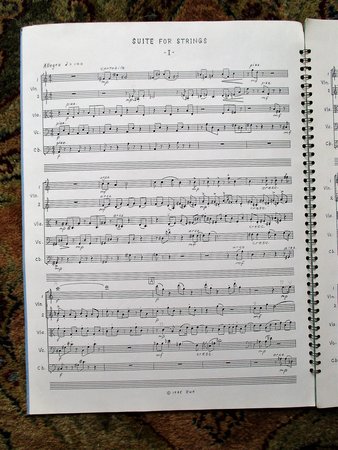 SUITE FOR STRINGS, by RUTH WATSON HENDERSON. Sheet Music. Self Published, (Canada), 1985. Blue card covers, metal spiral bound, 11x15 inches, 23 pages of sheet music plus a title page. The composer's printed initials and date, Nov/85, are at the end of the score. VERY GOOD condition, the covers have corner and edge wear, the front cover has some sunning, otherwise solid, bright and clean. About the Canadian Composer and Pianist RUTH WATSON HENDERSON (from Wikipedia): ******Ruth Louise Watson Henderson (born 23 November 1932) is a Canadian composer and pianist. She was the accompanist for the Festival Singers of Canada under Dr. Elmer Iseler for many years, where she developed her ear for composing mixed choral works. Henderson also accompanied the Toronto Children's Chorus under Jean Ashworth Bartle from its inception in 1978 to 2007 and was music director for Kingsway Lampton United Church in Toronto from 1996 to 2013. An associate of the Canadian Music Centre, Watson Henderson's compositional output includes works for organ, piano, violin, trumpet, string orchestra, and more than 200 choral pieces. Her works are known for their use of modal and impressionistic harmonies. In 1989 her Chromatic Partita for Organ won a prize in an International Competition for Women Composers in Mannheim, Germany. In 1992 her Voices of Earth won the National Choral Award for Outstanding Choral Composition. In 1996 she received the Distinguished Service Award of the Ontario Choral Federation. Many of her works have been recorded and enjoy international popularity. Additionally, Canadian choirs often perform entire concerts of her compositions.******