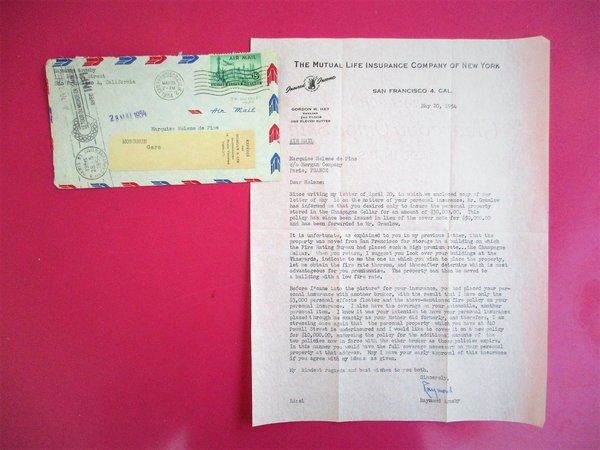 The Marquise Helene de Pins was a French Aristocrat who inherited the BEAULIEU VINEYARDS of Rutherford, NAPA VALLEY.

Raymond Armsby was a San Francisco socialite, Member of the BOHEMIAN CLUB, and, at the time, an Insurance agent for the rich and famous.

Single Page Typed Letter, Signed by Armsby, on Mutual Life Insurance Co. of New York stationery. The letter is dated May 20, 1954. The letter comes with its original mailing envelope.

In the letter Armsby suggests to Marquise de Pins that her property (i.e. wines) stored in an expensive to insure Champagne Cellar be moved to one of the buildings on her Vineyards where FIRE INSURANCE rates would be less expensive, implying that the$30,000 in insurance she currently held should be returned to a $50,000 level. From the letter: "...you desired only to insure the personal property stored in the Champagne Cellar for $30,000...It is unfortunate...that the property was moved from San Francisco for storage in a building on which the Fire Rating Bureau had placed such a high premium rate...I suggest you look over your buildings at the Vineyards, indicate to me the one in which you wish to place the property...a building with a low fire rate..."

Condition: The letter has several folds from where it was folded to fit into a small envelope, and some corner tip creases. Overall the letter is tight, bright, clean. The envelope is well used, lots of postal stamps, a forwarding label, and wear from being opened, but still clearly shows the return address and the name of Marquise Helene de Pins.

About the Marquise Helene de Pins, aka Madame de Pins, and the Beaulieu Vineyards (from Wikipedia):

******Marquise Helene de Pins, the widow of the Marquis de Pins and daughter of the late Georges de Latour, who founded Beaulieu Vineyard in 1900 after immigrating to the United States from the Perigord region of southern France, inherited the Beaulieu Vineyards after the death of her husband.

In the 1950s and 1960s Beaulieu was considered one of the Big Four Napa Valley producers, along with Inglenook, Charles Krug, and Louis Martini.

The winery was purchased by international conglomerate Heublein in 1969. Heublein was later acquired by RJR Nabisco, then sold to Grand Metropolitan in 1987. Grand Metropolitan became Diageo plc in 1997 through a merger with Guinness. In 2016 Diageo sold Beaulieu Vineyard to Treasury Wine Estates.******