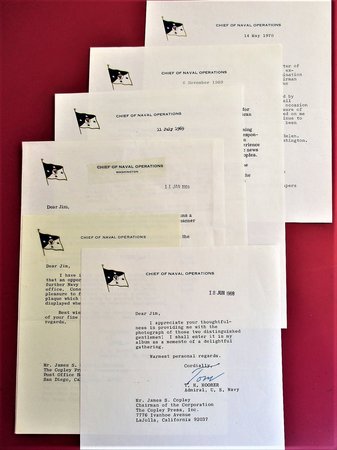 1968-1970 SIX LETTERS from ADMIRAL THOMAS H. MOORER, CHIEF OF NAVAL OPERATIONS, to JAMES S. COPLEY, Publisher of a group of papers including the SAN DIEGO UNION, re: COPLEY MEDIA'S SUPPORT of THE MILITARY and U.S. CONSERVATIVE NATIONALISM. All the letters are personal and friendly, obviously the two men are friends, equally obvious is that the Very Conservative Admiral is courting the Copley Media through this friendship. The letters are all on official CHIEF OF NAVAL OPERATIONS stationery of various sizes (3 are 7x8.5 inches, 2 are 7.5x10.5 inches, 1 is 6x7.5 inches). The letters are all typed and hand signed.

The letters reference a couple of notable events, THE PUEBLO CRISIS and INVESTIGATION, and Moorer's nomination by President Nixon to be Chairman of the Joint Chiefs of Staff (a position Moorer held from 1970 to 1974). The letters are dated from 12 JUN 1968 to 14 MAY 1970. Some excerpts: "Once again the Navy owes you and your fine publications a commendation for the considerate and highly responsible manner in which you have reported the entire PUEBLO AFFAIR. Your editorial treatment has been distinguished from the beginning by sympathetic and sensitive understanding". "Too often, other news media around the nation have damaged the Navy or our men by implication or innuendo. Our job would be much less complicated if some in the news media field would follow the responsible example you have set in this matter." "The Country is indeed fortunate that someone in your position is so well aware of the dangers facing us in the years ahead... I assure you that I will do my best in the years ahead and will take advantage of your offer of help." "I appreciate the kind sentiments... incident to my recent nomination by PRESIDENT NIXON to become the next CHAIRMAN OF THE JOINT CHIEFS OF STAFF... Warmest personal regards... would enjoy seeing you here in Washington." CONDITION: The letters all have folds from where they were folded to fit into envelopes (envelopes not present), and some light signs of handling, otherwise bright, clean and clear. SCARCE Group of Six Letters showing a MUTUALLY BENEFICIAL FRIENDSHIP between a CONSERVATIVE CHIEF OF NAVAL OPERATIONS and a NATIONALISTIC MEDIA MOGUL. Beware the Military Media Complex! About Thomas Hinman Moorer (excerpted from Wikipedia): ******Thomas Hinman Moorer (b. 1912 d. 2004) was an ADMIRAL in the UNITED STATES NAVY who served as CHIEF OF NAVAL OPERATIONS from 1967 to 1970, and as CHAIRMAN OF THE JOINT CHIEFS OF STAFF from 1970 to 1974.****** About James S. Copley (excerpted from Wikipedia): ******James Strohn Copley (b. 1916 d. 1973) was a newspaper publisher. He published the San Diego Union, The San Diego Union-Tribune, and the San Diego Evening Tribune, from 1947 until his death in 1973. His politics were unabashedly conservative, Republican and Nationalist. He had close associations with leading Republicans of the era, including Barry Goldwater and Richard Nixon. He strongly supported the U.S. Military and its involvement in Vietnam, and was reportedly, according to Carl Bernstein, in secret cooperation with the CIA.******