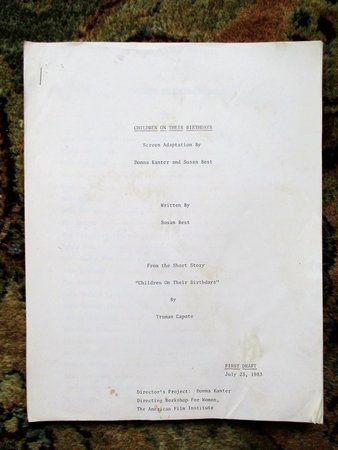 CHILDREN ON THEIR BIRTHDAYS. An UNPRODUCED SCREENPLAY Adapted for the Screen by DONNA KANTER and SUSAN BEST, from the Short Story by TRUMAN CAPOTE. This screenplay was DONNA KANTER'S 1983 DIRECTOR'S PROJECT while in the AMERICAN FILM INSTITUTE (AFI) DIRECTING WORKSHOP FOR WOMEN. She was in the class of 1982-1984. The screenplay is a First Draft dated July 23, 1983. Photocopied on plain 8.5x11 inch paper, stapled at the upper corner, 34 pages plus a title page, printed on one side only. GOOD MINUS condition, the first and last pages have creases and soiling, there are numerous staple holes at the upper left corner (though only one staple currently holds the pages together), some pages are dog eared at their top or bottom corner, and their are general signs of handling and use; still a complete copy of an interesting screenplay resulting from the AFI's attempts to get more women into film directing. Though this early, student screenplay was never filmed, its creation at the AFI Directing Workshop for Women certainly had an impact on Donna Kanter. She later established a successful Television and Film Production Company, The Donna Kanter Company. About the AFI DIRECTING WORKSHOP FOR WOMEN (from the AFI site): ******Since 1974, the AFI Directing Workshop for Women has trained hundreds of women in the art of screen directing. Below are the alumnae from each cycle since the start of the program... (CLASS OF 1982-1984 includes Donna Kanter)... Distinguished DWW alumnae include Maya Angelou, Anne Bancroft, Neema Barnette, Tricia Brock, Ellen Burstyn, Rebecca Cammisa, Dyan Cannon, Hanelle Culpepper, Jan Eliasberg, Naomi Foner, Jennifer Getzinger, Lyn Goldfarb, Randa Haines, Victoria Hochberg, Marianne Jean-Baptiste, Lesli Linka Glatter, Lynne Littman, Matia Karrell, Nancy Malone, Becky Smith, Cicely Tyson and Joanne Woodward.******