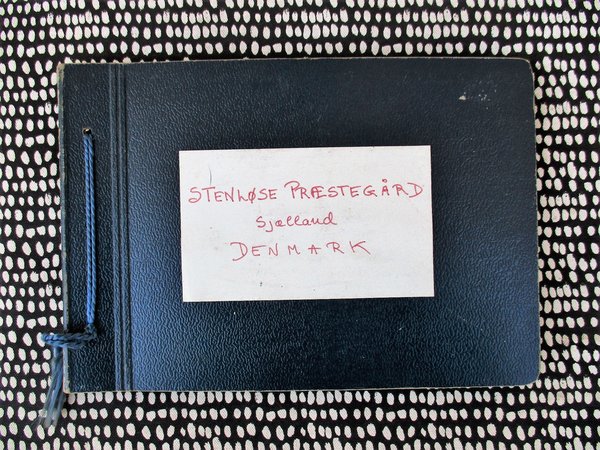 Photo Album of STENLØSE VICARAGE, SJÆLLAND, DENMARK by Woman who Grew Up There

Photo album of the house, church, stable and buildings of Stenløse Præstegård (Vicarage) located in Sjælland (Zealand) Denmark. The album belonged to a woman who grew up there, and it is full of her notes about where she and her family lived in the vicarage. There are 12 photographs and a postcard. The photographs are mostly 3.5x4.5 inches, one 4.5x6.5 inches, one mounted on cardboard backing. The photo album has vinyl covers, measures 6.5x9.5 inches, and has 6.5x9 inch inner leaves. The photos are glued to the pages, though a couple have come loose. One photograph is missing. Each photo is protected by a tissue guard. The postcard is loose and at the rear. What makes this album interesting is that there are handwritten annotations beside or beneath each photograph. These personal notes provide wonderful details about how the Stenlose Vicarage was occupied by her family in the 1920s. The photos seem to be snapshots from the 1960s, except for one which is dated 1925, but the notes seem to describe a life that was lived in the vicarage in the 1920s. The first album page has a photograph of the Stenlose Praestegaard (unfortunately the photo has numerous significant tears, but fortunately it is still bright and clear). Here are some of the handwritten notes on the first album page that accompany the photo: "From left - My Brother Otto's Room; 1 Butler's Pantry; 2 Kitchens; Upstairs MY 2 Windows; At Left 2 Guest Rooms: At Right 2 Maids Rooms; Back - Dad's Study / Mom's Parlor; Mom's Bedroom". The next photo is of a boy and girl on an old 4 wheeled cycle of some sort. The photo is mounted on cardboard. Beneath the photo is written: "1925 / OTTO OG INGER / Stenlose Praestegaard". On the back of the cardboard mount INGER has written: "Stenlose Vicarage / My hair rolled up at the ears called Meatball style. My brother Otto never let me steer!" The rest of the photos in the album are various shots of the vicarage, church, stable building, etc., each with a brief written description. The last item is a postcard of the Stenlose Kirke, which was written to Inger. It is dated 1982 and is completely written in Danish. Condition: The album itself is in solid, good condition. The first photograph has many tears but they are closed tears and the image itself is bright and clear; the rest of the photographs and the postcard are in good condition. One photograph is missing, just the handwritten description remains on that page. What a place to have roamed as a child!