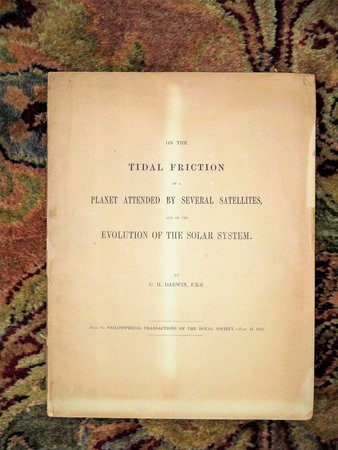 1881 G.H. DARWIN on TIDAL FRICTION of a PLANET and EVOLUTION of the SOLAR SYSTEM

On the TIDAL FRICTION of a PLANET ATTENDED by SEVERAL SATELLITES and on the EVOLUTION of the SOLAR SYSTEM, by G. H. DARWIN (George Howard Darwin, son of Charles Darwin). LONDON: Separately Bound extract from the Philosophical Transactions of the Royal Society Part II, 1881. First separately bound edition. Original Printed Wrappers / Paper Covers, 9x11.5 inches,45 pages (pages numbered 491 to 535), plus title page, plus 3 plates (plates numbered 61 to 63). Previously owned by HERBERT McLEAN EVANS, with his bookplate on the inside front cover. GOOD MINUS condition: Covers are toned, the bottom cover corners are creased and torn, almost detached, the cover edges are worn, the spine covering is chipped and missing several inches, the spine folds are very tender and are split starting at the top for 6 inches (will easily split more and become detached, be careful). Internally, the pages are creased at their upper and lower corner, the inner hinge is split throughout but holding with the sewn binding, there is some foxing here and there, overall the inner pages remain bright, clean, clear and unmarked. About GEORGE H. DARWIN (from Wikipedia): ******Sir George Howard Darwin, b. 1845 d. 1912, was an English barrister and astronomer. George Darwin was born at Down House, Kent, the second son and fifth child of Charles Darwin and Emma Darwin. In 1883 Darwin became Plumian Professor of Astronomy and Experimental Philosophy at the University of Cambridge. He studied tidal forces involving the Sun, Moon, and Earth, and FORMULATED THE FISSION THEORY OF MOON FORMATION. Darwin was a Fellow of the Royal Astronomical Society (RAS) and won the Gold Medal of the RAS in 1892.****** About HOWARD McLEAN EVANS (previous owner of this publication): ******Herbert McLean Evans, b. 1882 d. 1971, was a U.S. anatomist and embryologist. He was a long time Professor of Anatomy at U.C. Berkeley.

Evans had a strong interest in the history of science and was an active collector of rare books in the field. His collection was later acquired by the Harry Ransom Center at the University of Texas at Austin.******