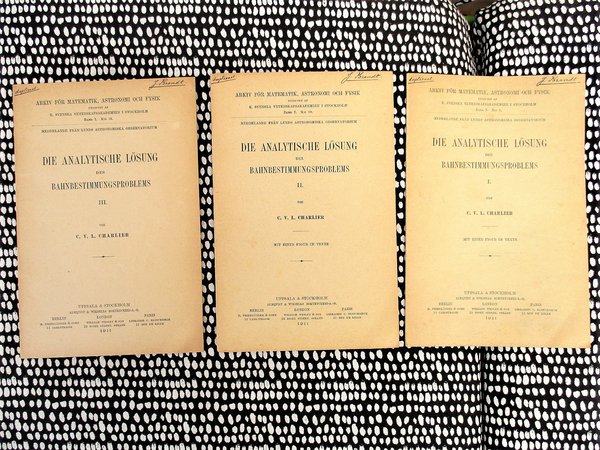 DIE ANALYTISCHE LÖSUNG DES BAHNBESTIMMUNGPROBLEMS, Volumes I, II and III. By Carl Vilhelm Ludvig Charlier. (Analytical Solution to the PATH DETERMINATION PROBLEM.) Three Parts in Three Booklets. Text in German. Published by Almqvist & Wiksells Boktryckeri, Uppsala & Stockholm, Sweden, 1911. Paper covers, sewn binding, 5.5x8.25 inches, 21, 28, and 31 pages respectively. GOOD Condition: there is a previous owner's signature and a handwritten "duplicate" at the top of each front cover, light toning, some corner wear and signs of handling, overall still tight, bright, clean and clear. A solid set of this 3 Part Work. A RARE and interesting analytical / astronomical study. About CARL VILHELM LUDVIG CHARLIER (from Wikipedia): ******Carl Vilhelm Ludvig Charlier (b. 1862 d. 1934) was a Swedish astronomer. He received his Ph.D. from Uppsala University in 1887. He became a Professor of Astronomy and the Director of the Observatory at Lund University in 1897. Charlier made extensive statistical studies of the stars in our galaxy and their positions and motions, and tried to develop a model of the galaxy based on this. He proposed the siriometer as a unit of stellar distance. Related to his work on galactic structure, he also developed a cosmological theory based on the work of Johann Heinrich Lambert. In the resulting Lambert-Charlier Hierarchical Cosmology, increasingly large areas of space contain decreasing densities of matter, the principle being introduced to avoid the observational inconsistency that would otherwise emerge from Olbers Paradox. Late in his career, he translated Isaac Newton's Principia into Swedish. He died in Lund, aged 72.******