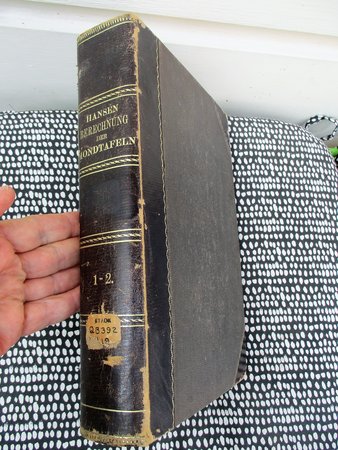 DARLEGUNG der THEORETISCHEN BERECHNUNG der in den MONDTAFELN ANGEWANDTEN STÖRUNGEN, by Peter Andreas Hansen. Parts I and II. LEIPZIG : Bei S. Hirzel, 1862 and 1864. Text in German. TWO PARTS BOUND IN ONE. First Bound Volume, originally printed in the Abhundlungen der Mathematisch... Band VI and Band VII. Hardcovers, leather spine and corners, spine is titled and lined in gilt, 7x10.5 inches. Pagination: [2], 93 to 497, [1]; [2], 3 to 399 pages. (Hansen's work in Band VI of the Abhundlungen der mathematisch began on page 93, thus the work is complete as paginated.) Numerous tables, a few folding. PRESENTATION COPY with the AUTHOR'S INSCRIPTION to FRIEDRICH WILHELM AUGUST ARGELANDER, who was Director of the OBSERVATORY at BONN, GERMANY, on a Clipped Portion of the Original Wrapper, which is now glued to the front free endpaper. COPY of C.H.F. PETERS, who was DIRECTOR of the OBSERVATORY at HAMILTON COLLEGE, Clinton, New York, with his bookplate on the front pastedown. ASSOCIATION to ELIHU ROOT, NOBEL PEACE PRIZE WINNER and Alumnus of HAMILTON COLLEGE. There is a Hamilton College Library Bookplate on the front pastedown which states: "GIFT OF ELIHU ROOT, DEC. 1892" (NOT his signature, his name was probably written in by a librarian). There is another early Hamilton College Library label on the front pastedown and a couple of its library marks and numbers here and there. The Hamilton Library and C.H.F. Peters bookplates, and the clipped Presentation inscription, all have a light "withdrawn" rubber stamp. GOOD CONDITION: The cover leather is scraped and rubbed at the spine folds, spine ends and corner edges, otherwise the covers are solid and attractive. Internally, there are the presentation, association, and Hamilton College Library labels on the front endpapers as noted above; there is the remnant of a (card pocket?) on the rear pastedown; there is a nickel size scrape and a number written on the title page; some light soiling to the margins, a spot here and there, and some corner creasing; overall the inner pages remain tight, bright, clean and clear. A solid, nice copy. RARE with the INSCRIPTION and ASSOCIATIONS. About Peter Andreas Hansen (from Encyclopedia Britannica online): ******Peter Andreas Hansen, (b. 1795 d. 1874), Danish born German astronomer whose most important work was the improvement of the theories and tables of the orbits of the principal bodies in the solar system. Hansen became director of the Seeberg Observatory, near Gotha, in 1825, and in 1857 a new observatory was built for him. He worked on theoretical geodesy, optics, and probability theory. The systematic character of Hansen's methods carried celestial mechanics to a new level of power and precision. The tables based on his theory were used until 1923. From his theory of the Moon, Hansen deduced a value close to that now accepted for the distance between Earth and the Sun. Assisted by the astronomer Christian Olufsen, Hansen compiled new tables of the Sun's positions at various times.****** About ELIHU ROOT (from Wikipedia): ******Elihu Root, b. 1845 d. 1937, was an American lawyer and statesman who served as the Secretary of State under President Theodore Roosevelt and as Secretary of War under Roosevelt and President William McKinley. He advised presidents on a range of foreign and domestic issues. Root was awarded the Nobel Peace Prize in 1912.****** INTERNATIONAL BUYERS PLEASE NOTE: This book is large and heavy will require additional shipping charges. After placing your order you will be notified of the additional charges and be able to accept or reject them before your payment is processed. Or you can contact us ahead of time to find out the shipping charge to your country. Thanks.