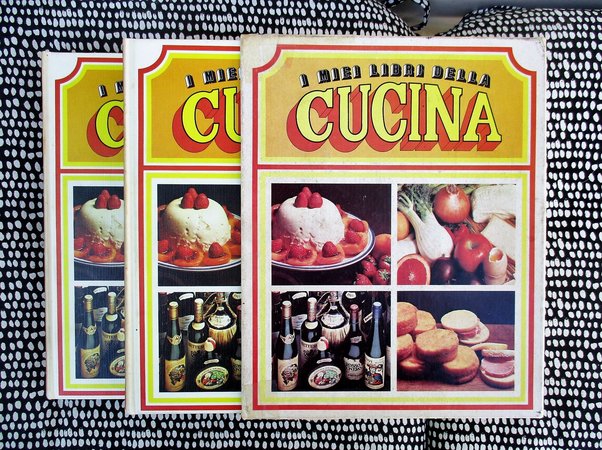 I MIEI LIBRI DELLA CUCINA (My Kitchen Books). TWO VOLUME SET of ILLUSTRATED ITALIAN COOK BOOKS in Slipcase. 443 Recipes, many illustrated, plus menu suggestions and sections on wine, nutrition, etc. at the end of Volume Two. Published by Rino Fabbri Editore (Rino Fabbri, Publisher), Milan, Italy, 1975. Hardcovers, printed cloth covered boards, 8x10.5 inches, 488 total pages (pages numbered consecutively), in printed cardboard slipcase. Illustrated throughout with color photographs of delicious looking Italian dishes, including lots of gnocchi, pasta, soups and, of course, dolci (desserts!) The two books are in VERY GOOD condition, lightly used, still bright, clean, clear and unmarked; in a FAIR slipcase that has clear tape repairs and reinforcement but is still doing its job well. From the Estate of ROMANO DELLA SANTINA who owned, and whose children still own, MARIN JOE'S, the Venerable Italian Restaurant in Marin County, California. With these two comprehensive Italian Cookbooks you could open an Italian restaurant and never run out of ideas. Hey, that's just what the previous owner did! About ROMANO DELLA SANTINA from whose estate this book was acquired (excerpted from his online Obituary): ******ROMANO DELLA SANTINA, b. 1929 in Lucca Italy, d. 2015 in Marin California. In 1948 Romano immigrated with his wife to America where he joined his uncle, Adolph Della Santina, at Original Joe's II in San Francisco. In 1954, Adolph Santina opened MARIN JOE'S and Romano joined him. Soon he became a partner at Marin Joe's and 61 years later the restaurant is still family owned and thriving. Along with his wife, he leaves behind four children; Paul, Joanne, Tina and Ralph, their spouses, seven grandchildren and four great grandchildren; and also leaving two brothers, family and friends in Lucca, Italy. Romano was a proud Italian American and his involvement in the Italian American community ran deep. In 1984 he was bestowed the highest honor given to an Italian civilian, Cavaliere Dell'Ordine della Republica Italiana.****** INTERNATIONAL BUYERS PLEASE NOTE: These two books in slipcase are large and heavy requiring substantial additional shipping charges. After placing your order you will be notified of the additional charges and be able to accept or reject them before your payment is processed. Or you can contact us ahead of time to find out the shipping charge to your country. Thanks.