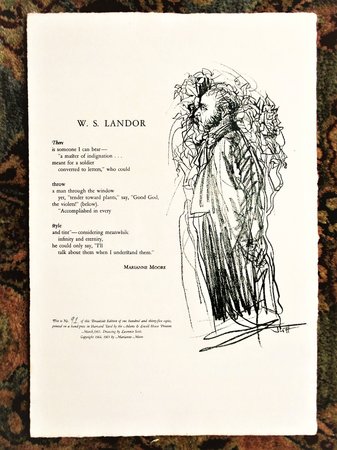 W. S. LANDOR. A BROADSIDE POEM by MARIANNE MOORE. ILLUSTRATED by LAURENCE SCOTT. Published by ADAMS & LOWELL HOUSE PRINTERS, Harvard Yard, Cambridge, March, 1965. Limited Edition, this being 1 of only 135 copies, this copy being hand numbered #91. "This is No. 91 of this Broadside Edition of one hundred and thirty-five copies, printed on a hand-press in Harvard Yard by the Adams & Lowell House Printers, March, 1965." Broadside with b&w illustration, printed on fine, watermarked, cream colored, rag paper, 12x17 inches. The watermark is an image of a hammer and anvil. NEAR FINE condition. There is a tiny pin hole near the top and bottom which I believe was part of the hand-printing process. A Bright and Lovely Broadside. This broadside came from the estate of Dennis C. Turner, a San Francisco Doctor who was a Friend of Many Poets and Artists, and who was also a Fine-Printer and broadside publisher in his early days at Harvard when he was involved as one of the student printers at the LOWELL-ADAMS HOUSE PRINTERS. He was a longtime friend of Cecil Day Lewis, Albert Gelpi, and a number of other poets and writers. He died in 2013. These ADAMS & LOWELL HOUSE, HARVARD YARD broadsides from the mid 1960s, especially those by important American poets, are SCARCE.