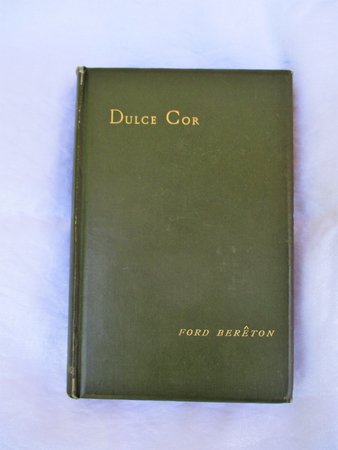 DULCE COR: Being the POEMS of FORD BERÊTON (pseudonym of SAMUEL RUTHERFORD CROCKETT). LONDON: Kegan Paul, Trench & Co., MDCCCLXXXVI (1886). First Edition. Hardcovers, olive green cloth covered boards lettered in gilt on the front cover and spine, 5x7.5 inches. Pagination: xii, 200 pages. Frontispiece portrait and one plate, both with their tissue guards. This is the FIRST BOOK by the SCOTTISH writer S.R. CROCKETT, b. 1860 d. 1914. It is a collection of poetry written under the pseudonym FORD BERÊTON. The book was published the year Crockett was ordained into the Church of Scotland. It would be seven years later, and after resigning his ministry, that Crockett would begin publishing his famous SCOTTISH STORIES, beginning with his successful THE STICKIT MINISTER. This copy has an IMPORTANT SCOTTISH LITERARY ASSOCIATION, with the penciled ownership SIGNATURE and handwritten ADDRESS of Scottish writer WILLIAM SHARP on the half title page. William Sharp wrote under his name and under the pseudonym of FIONA MACLEOD. He was a contemporary of Samuel Crockett. He was also a contemporary of William Butler Yeats who reportedly liked the writing of Fiona Macleod but not the writing of William Sharp. There is a lovely pictorial bookplate of Albert Harrison on the front pastedown. I have no idea who he might be. VERY GOOD condition, the covers have some wear and rubbing to the spine ends and corner tips, there is foxing here and there, most noticeable on the first and last few pages, the leaf consisting of pages 95/96 is missing its upper corner (probably from being roughly cut open), not affecting text; otherwise tight, bright, clean and unmarked. The penciled signature and handwritten address of William Sharp are clear and legible. About S.R. CROCKETT (from Wikipedia): ******Samuel Rutherford Crockett, b.1859 d.1914, who published under the name S. R. CROCKETT, was a Scottish novelist. After some years of travel, he became in 1886 an Ordained Minister of Penicuik. During the same year as his ordination, his first book, Dulce Cor (Latin: Sweet Heart), a collection of verse under the pseudonym Ford Brereton, was published. That was the only book he published until he abandoned the ministry to become a writer. The success of J. M. Barrie and the Kailyard school of sentimental, homey writing had already created a demand for stories in Lowland Scots, when Crockett published his successful story of The Stickit Minister in 1893. It was followed by a rapidly produced series of popular novels frequently featuring the history of Scotland or his native Galloway. Crockett made considerable sums of money from his writing and was a friend and correspondent of R. L. Stevenson. A substantial number of his works have been republished since the 100th anniversary of his death.****** About WILLIAM SHARP / FIONA MACLEOD (from Wikipedia): ******William Sharp, b.1855 d.1905, was a Scottish writer, of poetry and literary biography in particular, who from 1893 wrote also as Fiona Macleod, a pseudonym kept almost completely secret during his lifetime. Sharp's poem THE LONELY HUNTER inspired the title of Carson McCullers debut novel THE HEART IS A LONELY HUNTER. His poem contains the lines "Deep in the heart of Summer, sweet is life to me still, But my heart is a lonely hunter, that hunts on a lonely hill". In Disney's 2017 movie production of Beauty and the Beast, Belle recites to the Beast several lines of Sharp's poem A Crystal Forest: "Each branch, each twig, each blade of grass, / Seems clad miraculously with glass".******