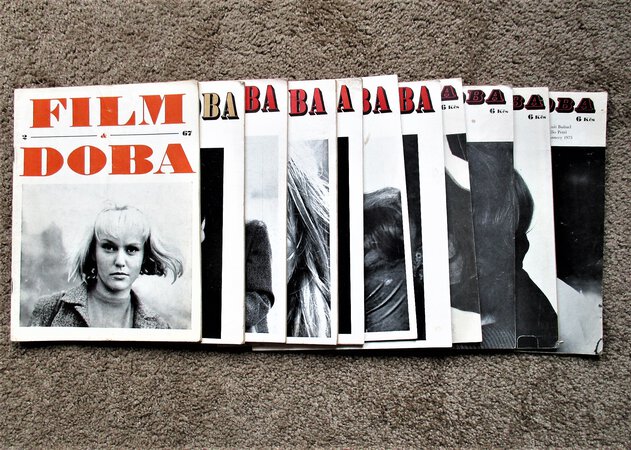 Twelve Issues of FILM A DOBA, the CZECHOSLOVAKIAN FILM JOURNAL that was, during the Sixties and Seventies, both a well respected publication of reviews of Czech and International Films, and an important intellectual force during the Russian Occupation. Eleven of these issues are from the 1970s and one is from 1967, all years in which the Czech film industry was highly regarded even while being regulated by the Russians. The twelve issues are from: 1967 (1), 1972 (2), 1973 (3), 1975 (2), 1976 (2), 1977 (1), and 1978 (1). Softcover magazines, side stapled, 8x10.5 inches, approximately 50 to 60 pages each. GOOD MINUS condition, the issues all have a vertical crease down the middle (perhaps delivered that way); some of the issues have bumped/creased spine ends, most have some edge and corner wear; the covers have some soiling; there are some small stains and a bit of writing here and there; a couple of the covers are pulling from the staples; internally, the pages are printed on cheap paper that has browned (this was during the Russian occupation, after all), there are creases and other signs of handling; nonetheless these 12 issues are solid and complete. An interesting look at one aspect of the intellectual and artistic life in Czechoslovakia during the Russian occupation. Early issues of Film a Doba are hard to find. INTERNATIONAL BUYERS PLEASE NOTE: These 12 issues will require additional shipping charges. After placing your order you will be notified of the additional charges and be able to accept or reject them before your payment is processed. Or you can contact us ahead of time to find out the shipping charge to your country. Thanks.