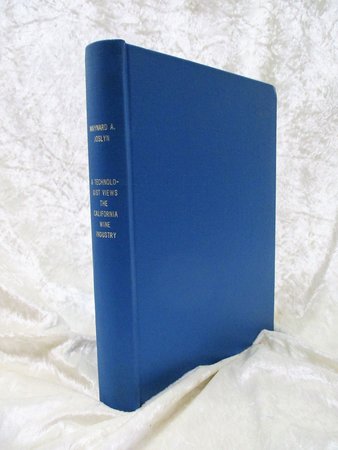 MAYNARD A. JOSLYN : A TECHNOLOGIST VIEWS THE CALIFORNIA WINE INDUSTRY. An Interview Conducted by Ruth Teiser. With an Introduction by Gordon Mackinney.

From the "Interview History" page: "Two initial interview sessions were held on May 2 and June 3, 1969... the two final sessions were (held) on April 17 and June 28, 1973... The transcripts of the first two session were sent to Professor Joslyn on April 11, 1973, to read over before the next session. The transcripts of the third and fourth sessions were sent to him on September 6, 1973. All were returned before the end of that month, meticulously edited by Professor Joslyn... The final transcript was also reviewed by Dr. Joslyn..." - Ruth Teiser, Interviewer and Editor, 19 August 1974, Regional Oral History Office, University of California at Berkeley.

This ORIGINAL UC BERKELEY FIRST EDITION is Hard to Find.

About MAYNARD ALEXANDER JOSLYN (from Wikipedia):

******Maynard Alexander Joslyn, b.1904 d.1984, was a Russian-born, American food scientist who was involved in the rebirth of the American wine industry in California following the repeal of Prohibition in 1933. Joslyn was also involved in the development of analytical chemistry as it applied to food, leading to the advancement of food chemistry as a scientific discipline. Joslyn won two Diplome d'Honneur (honorary diplomas) from the French Office International de la Vigne et du Vin (International French Wine and Vineyard Office) in Paris. He also earned the Merit Award from the American Society for Enology and Viticulture in 1971.******

INTERNATIONAL BUYERS PLEASE NOTE: This book is large and heavy, and will require additional shipping charges. After placing your order you will be notified of the additional charges and be able to accept or reject them before your payment is processed. Or you can contact us ahead of time to find out the shipping charge to your country. Thanks.