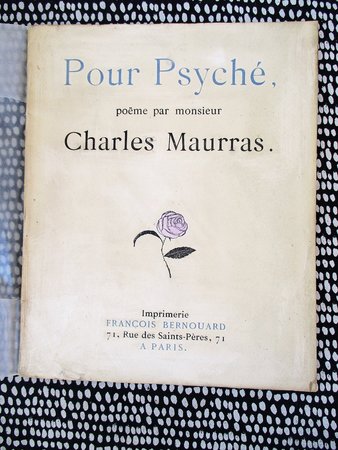 POUR PSYCHÉ, by CHARLES MAURRAS. PARIS: A La Belle Édition / Imprimerie François Bernouard, 1919. Fine Printing from the Parisian Press of François Bernouard and his imprint A La Belle Edition. One of 500 numbered copies on Verge d'Arches paper, from a total edition of 550. This copy is numbered 417. Text in French. Illustrated paper wrappers in glassine jacket, 8x10 inches (21.5x26.5cm), 28 unnumbered pages. Condition: GOOD book, soiling to the front cover, toning to the page edges, otherwise bright, clean and clear; in a toned / browned but otherwise GOOD glassine wrapper. A solid, complete, presentable copy. About CHARLES MAURRAS (excerpts from Wikipedia): ****** Charles Marie Photius Maurras, b.1868 d.1952, was a French author, politician, poet, and critic. He was an organizer and principal philosopher of Action Française, a political movement that was monarchist, anti-Semitic, anti-parliamentarist, and counter revolutionary. Maurras' ideas greatly influenced Nationalisme Intégral. A major tenet of Integral Nationalism was stated by Maurras as: "a true nationalist places his country above everything else". A political theorist and a major intellectual influence in early 20th century Europe, his views influenced several far right ideologies; as well as some of the ideas of fascism. Maurras was arrested in September 1944 and indicted by High Court of Lyon for "complicity with the enemy". Maurras was sentenced to life imprisonment. He was automatically dismissed from the Académie Française. Imprisoned in Riom and then Clairvaux, Maurras was released in March 1952 to enter a hospital. Although weakened, Maurras collaborated with Aspects de la France, which had replaced the outlawed review Action Française in 1947. He was transferred to a clinic in Tours, where he soon died. Former Chief Trump White House strategist Steve Bannon has quoted Maurras approvingly. ("Stephen Bannon Is a Fan of a French Philosopher Charles Maurras Who Was an Anti Semite and a Nazi Supporter and was sentenced to life in prison for complicity with the Nazis" Mother Jones magazine March 16, 2017)****** About FRANÇOIS BERNOUARD (from Wikipedia) ******François Bernouard, b.1884 d.1949, was a French publisher of the early 20th century, also a poet and playwright. He founded his publishing house in 1909. He published under four names: FRANÇOIS BERNOUARD, À LA BELLE ÉDITION, TYPOGRAPHIE FRANÇOIS BERNOUARD, and À SCHÉHÉRAZADE. His finely printed books are distinguished by the presence on the cover of a rose drawn by Paul Iribe .The collection of À la Belle Édition was reprinted in September 1943 by JB Janin.******