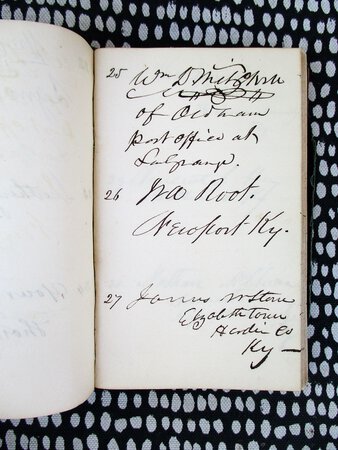 1849 KENTUCKY CONSTITUTIONAL CONVENTION SIGNATURE BOOK with SIGNATURES of 95 COUNTY REPRESENTATIVES, plus Sergeant at Arms, Reporters, etc. The Constitutional Convention signatory Sign In notebook was owned by THOMAS N. LINDSEY, member of the notable LINDSEY FAMILY of FRANKFORT KENTUCKY. Thomas N. Lindsey was the Representative of Franklin County, Kentucky. His signature is on the backside of the first page. The Signature Book is 3x5 inches and filled with blank paper. Lacking the front cover, however the spine covering and rear cover are present, as are all the inner pages. It appears likely that Thomas N. Lindsey was responsible for getting the signatures of the attending Representatives and others at the Kentucky Constitutional Convention of 1849 (that led to the adoption of the Constitution of 1850). He signed his name clearly on the verso of the first page, and I believe also on the back cover though that signature is very difficult to see. Though the notebook pages were blank, Lindsey wrote 3 numbers on a page up to number 100, leaving space by each number where Representatives signed in and identified themselves by county. 94 Representatives signed in and most wrote the county they represented below their signature, some also wrote the city they were from. The spaces beside numbers 95-100 are blank. However, Thomas N. Lindsey, the representative from Franklin County, signed at the front as noted above, meaning that this notebook contains a total of 95 signatures of the Constitutional Convention Representatives. Many of the signatures are accompanied with handwritten salutations: "Your friend" "Yours respectfully" etc. In addition to the 95 Representatives, there are signatures of the Sergeant at Arms, Clerk, Door Keeper, Deputy, 5 Reporters, and the Minister of the Gospel. I have been able to fully identify all but 5 of the 95 Representatives through a combination of their signatures and the counties they identified themselves with. There is not, unfortunately, enough room here to list them all, but I have all the identified Representatives names along with counties represented, so if you are interested just email me. In addition to the signatures of 95 Representatives, this Sign-in / Signatory Book contains the signature of the Clerk (Secretary of the Convention), Sergeant at Arms, Door Keeper, five reporters, and that of the Minister of the Gospel. The second to last page, following a number of blank pages, has the names and addresses of several Lindsey family members, perhaps put there by Thomas N. Lindsey so that this book could be passed down from one family member to another as an important historic keepsake? GOOD CONDITION. Front cover missing, as noted above, some creasing and edge chipping to the first page, the rear inner hinge is split but holding well, otherwise the pages are solid, well bound, and all the signatures and writing is bright and clear. The 1850 Kentucky Constitution was extremely PRO SLAVERY. You can read about the 1850 Kentucky Constitution and the 1849 Kentucky Constitutional Convention on many sites on the Internet.