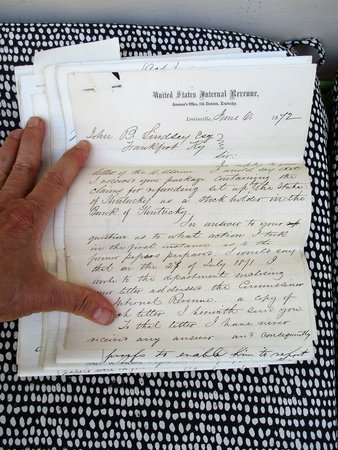 1873 KENTUCKY STATE CLAIMS FOR TAX REFUNDS to & from JOHN B. LINDSEY, Attorney for the State of Kentucky

Twelve Handwritten Letters To and From the United States Internal Revenue Service. Written by and to JOHN B. LINDSEY of FRANKFORT, KENTUCKY who was the Kentucky State Attorney General at the time.

The letters are all handwritten. They vary in length from one to several pages. Some have attached documents. The letters are dated 1872 to 1873, with most being in the year 1873. The letters are regarding CLAIMS for TAX REFUNDS by the STATE OF KENTUCKY. The State claims that taxes were improperly assessed and therefore should be refunded.

An insiders look at Kentucky's fight against what it felt was improper taxation by the United States in the post Civil War period.

One letter has an image of and information about the 1873 LOUISVILLE INDUSTRIAL EXPOSITION on its back side (the front side being a handwritten letter on official FITCH & LINDSEY letterhead).

GOOD condition, the writing is all bright and clear, some age toning and signs of handling, the letters are all double folded together, and appear to have been stored fully folded. They will be shipped folded, as is their natural state.