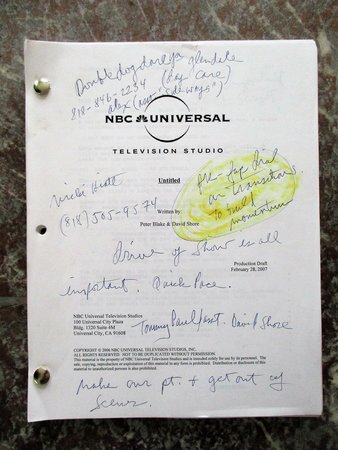 DRAFT SCRIPT by PETER BLAKE & DAVID SHORE with HANDWRITTEN ANNOTATIONS throughout. Peter Blake and David Shore were the duo that Produced and wrote episodes of a number of notable television series, including HOUSE. This working draft script was titled UNTITLED, but clearly ended up being the 2007 TV FILM ALIBI. My assumption is that it was meant to be the pilot for a series, but was not picked up as such, and so became a TV Movie. What makes this development script so interesting is that there are handwritten comments, marks, changes, etc., here and there throughout. I do not know for certain whose working copy this script was, but presumably it was the copy of either Peter Blake or David Shore. 62 photocopied pages (typical for scripts in development), 8.5x11 inches, three hole punched, bound with 2 brass brads. The annotations are all handwritten directly onto this working copy. Published by NBC Universal Television Studios, 2006. VERY GOOD condition, just light signs of handling, overall bright, clean and clear. An interesting look at a new series in early development by two of the hottest producers / writers in television.