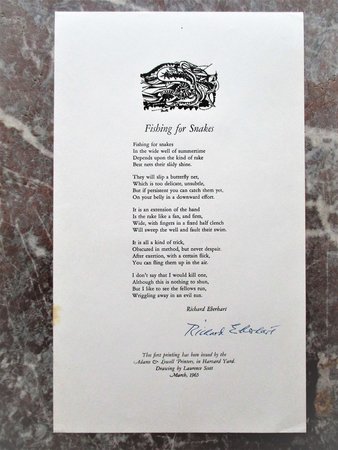 FISHING FOR SNAKES. Poetry BROADSIDE by RICHARD EBERHART. Illustration by LAURENCE SCOTT. SIGNED by the POET, RICHARD EBERHART, in blue ink below his printed name. Published by ADAMS & LOWELL PRINTERS, in Harvard Yard, (Cambridge, Massachusetts), March, 1965. First Printing. "This first printing has been issued by the Adams & Lowell Printers, in Harvard Yard. Drawing by Laurence Scott. March, 1965". Single sheet broadside with b&w illustration, 7.5x12 inches. VERY GOOD condition, bit of light creasing to the corners, a half dime size area of browning to the left edge, overall bright, clear and lovely. ADAMS & LOWELL PRINTERS' broadsides from the mid 1960s, especially those SIGNED by Important American Poets, are hard to find. About RICHARD EBERHART (from Wikipedia): ******Richard Ghormley Eberhart (April 5, 1904 - June 9, 2005) was an American poet who published more than a dozen books of poetry and approximately twenty works in total. He won the Pulitzer Prize for Poetry for Selected Poems, 1930-1965, and the 1977 National Book Award for Poetry for Collected Poems, 1930-1976. President Dwight Eisenhower appointed Eberhart a member of the Advisory Committee on the Arts for the National Cultural Centre in 1959. Eberhart was Poet Laureate Consultant in Poetry to the Library of Congress for 1959-61, and was awarded a Bollingen Prize in 1962. He was elected to the American Academy of Arts and Letters in 1982. He also won the Shelley Memorial Award, the Harriet Monroe Memorial Award, and the Frost Medal from the Poetry Society of America.******