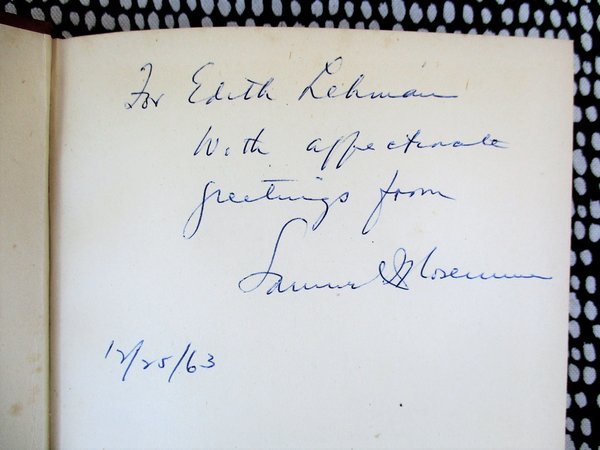 WORKING WITH ROOSEVELT, by SAMUEL I. ROSENMAN. WARMLY INSCRIBED, SIGNED and DATED on the front free endpaper by SAMUEL ROSENMAN: "For Edith Lehman / With affectionate / greetings from / Samuel I. Rosenman / 12.25.63". A nice association to Edith Lehman (see about her at the end of the listing). Published by Rupert Hart-Davis, London, 1952. First U.K. edition. Hardcover Book, no dustjacket, 5.5x8.5 inches, 510 pages. VERY GOOD condition: The spine is slightly faded, the front cover has the ghost from the removal of a dime size label, overall the covers are solid and doing their job well. Internally, there is a bit of foxing to the endpapers, otherwise the inner pages are tight, bright, clean and unmarked. A solid, very nice copy. About SAMUEL I. ROSENMAN (from Wikipedia): ******Samuel Irving Rosenman (b. 1896 d. 1973) was an American lawyer, judge, Democratic Party activist and presidential speechwriter. He coined the term NEW DEAL, and helped articulate liberal policies during the heyday of the New Deal coalition. He was the first person to hold the position of White House Counsel. Rosenman was a senior advisor to presidents Franklin Roosevelt and Harry Truman. Under their administrations, he was a leading figure in the war crimes issue. He was also the first official White House Counsel, then called Special Counsel. He was a speechwriter under both presidents, helping Roosevelt with his speeches from his days as governor. Rosenman was responsible for the term "New Deal", a phrase in the conclusion of FDR's acceptance speech at the 1932 Democratic National Convention. While he was not heavily involved in speechwriting during Roosevelt's first term, he started traveling to Washington to help out with important talks during the 1936 campaign and was a key speech aide for the remainder of Roosevelt's life. He submitted his resignation as Special Counsel upon Roosevelt's death but Truman asked him to stay on, initially through V-E Day, then through V-J Day, and finally into 1946. Even after leaving the White House, he would periodically return to aid the president with major speeches, including his acceptance speech to the 1948 Democratic National Convention.****** About EDITH LEHMAN (to whom the book is inscribed): ******Edith Lehman (Edith Louise Lehman) was the wife of Herbert H. Lehman who was the first Jewish Governor of New York and later a Democratic Senator from New York. During his tenure as Senator, Herbert Lehman was one of the most liberal Senators in the Senate. As Governor, he and his wife Edith Lehman, were strong supporters of Franklin Delano Roosevelt. Both Herbert and Edith Lehman were major philanthropists, sometimes assisting and accompanying Eleanor Roosevelt in her charity endeavors.****** (An amazing woman. You can find photos of her with Franklin and Eleanor Roosevelt on the Internet.)