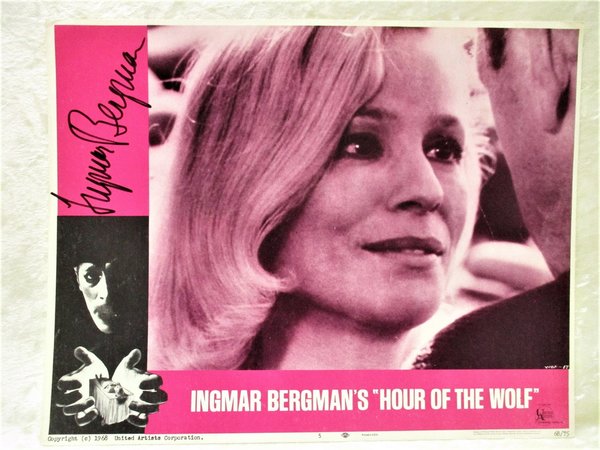 HOUR OF THE WOLF Film Lobby Card HAND SIGNED by the great Swedish DIRECTOR INGMAR BERGMAN. The Lobby Card is 11x14 inches. It is SIGNED by Bergman in the upper left area with a black felt pen. The signature is not dated. The film, Hour of the Wolf, was released in 1968. GOOD condition, creasing to the upper corners (please see photo), and a light diagonal crease across the right hand portion of the lobby card (faintly visible, see the provided photo where it crosses the left eye Ingrid Thulin). Overall a bright, clean, clear lobby card of this great film, with the Rare Hand Signature of Ingmar Bergman. Would look fantastic mounted and framed. INGMAR BERGMAN, b. 1918 d. 2007, was one of the greatest film directors of all time. You can read about him and his films all over the Internet. We FULLY GUARANTEE the SIGNATURE to be AUTHENTIC. About HOUR OF THE WOLF (from Wikipedia): ******Hour of the Wolf (Swedish: Vargtimmen) is a 1968 Swedish surrealist psychological horror drama film, directed by Ingmar Bergman and starring Max von Sydow, Liv Ullmann and Ingrid Thulin. It was ranked one of the 50 greatest films ever made in a 2012 directors' poll by the British Film Institute. The New York Times wrote that while it is "not one of Bergman's greatest films it is unthinkable for anyone seriously interested in movies not to see it."****** (I would add that Hour of the Wolf was one of the scariest films I ever saw, that and Revulsion, directed by Roman Polanski. Yikes!)