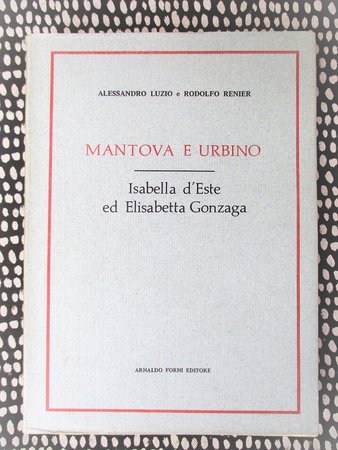 and ISABELLA D'ESTE - FAMILY RELATIONS and POLITICAL AFFAIRS, a Documented History by Alessandro Luzio and Rodolfo Renier.) Originally published in Rome in 1893 in an edition of 300 copies, THIS EDITION published by ARNALDO FORNI EDITORE, ITALY, 1976. Softcover Book in Printed Paper Dustwrapper, 6x8.5 inches, XV +333 pages. TEXT IN ITALIAN. VERY GOOD condition, just lightly used, still tight, bright, clean and unmarked. This 1976 ITALIAN EDITION published in ITALY is hard to find. About ELISABETTA GONZAGA (from Wikipedia): ******Elisabetta Gonzaga, b. 1471 d. 1526, was a noblewoman of the Italian Renaissance, renowned for her cultured and virtuous life. A member of the House of Gonzaga, she was a sister of Francesco II Gonzaga, Marquess of Mantua and by marriage the Duchess of Urbino. Because her husband, Duke Guidobaldo da Montefeltro, was impotent, Elisabetta never had children of her own, but did adopt her husband's nephew and heir, Francesco Maria I della Rovere.****** About ISABELLA D'ESTE (from Wikipedia): ******Isabella d'Este, b. 1474 b. 1539, was Marquess of Mantua and one of the leading women of the Italian Renaissance as a major cultural and political figure. She was a patron of the arts as well as a leader of fashion, whose innovative style of dressing was copied by women throughout Italy and at the French court. The poet Ariosto labeled her as the "liberal and magnanimous Isabella", while author Matteo Bandello described her as having been "supreme among women". Diplomat Niccolò da Correggio went even further by hailing her as "The First Lady of the world".******