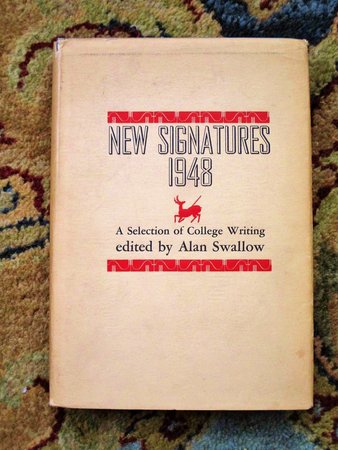 NEW SIGNATURES 1948 / NEW SIGNATURES 1 : A SELECTION OF COLLEGE WRITING, edited by ALAN SWALLOW. Published by Alan Swallow, printed at The Press of James Decker, Prairie City, Illinois, copyright 1947 but published in 1948. This book contains stories by various college students across the country, including the story THE BARBER by FLANNERY O'CONNOR, a student at the University of Iowa. Hardcover Book in its scarce Dustjacket, 5.5x8 inches, 178 pages. The Flannery O'Connor story is on pages 113 through 124. Great ASSOCIATION copy. SIGNED by ROBERT PENN WARREN who was on the SELECTION COMMITTEE for this anthology, and who became a FRIEND of FLANNERY O'CONNOR. From the front dj flap: "Alan Swallow...has been aided in his selection by such recognized leaders as Robert Penn Warren, Paul Engle, Yvor Winters..." The SIGNATURE of ROBERT PENN WARREN is on the blank page facing the title page, hand signed in red ink on a 2x4 inch label. Robert Penn Warren and Flannery O'Connor met at the University of Iowa in 1946 and became lifelong friends. You can read much about their long relationship online. Robert Penn Warren was the recipient of three Pulitzer Prizes for fiction and poetry. He conducted a number of published, personal interviews with Flannery O'Connor over the years. This is Flannery O'Connor's first appearance in a book. She did publish this story along with six others as part of her Master's Thesis at the University of Iowa in 1946, titled "The Geranium: A Collection of Short Stories". The story The Geranium was then published in the literary journal Accent: A Quarterly of New Literature, in 1946. Condition: VERY GOOD book, the covers have pushing at the spine ends, and one corner is lightly bumped; internally the pages have some light toning at the margins, otherwise tight, bright, clean, clear and unmarked. In a GOOD dustjacket that has wear to the spine ends and corner tips, including creases and small closed tears, soiling including some pea size spots to the rear panel, and some edge creases and wear; overall the covers are bright and solid, and retain their original 'Three Dollars" price at the top of the front flap. Robert Penn Warren's signature is bright and clear. Robert Penn Warren, b. 1905 d. 1989, and Flannery O'Connor, b. 1925 d. 1964, first met at the University of Iowa where Robert Penn Warren was teaching and Flannery O'Connor was a student.