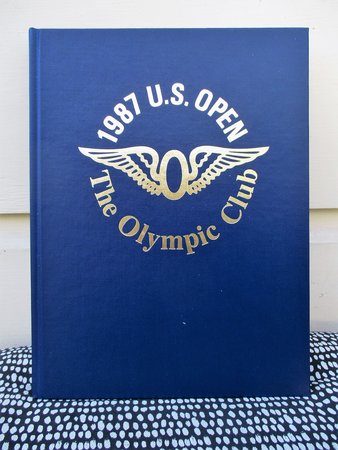 THE 1987 U.S. OPEN at THE OLYMPIC CLUB / LAKESIDE / SAN FRANCISCO, CA / JUNE 15-21, 1987. The Official Magazine of The Championship. This is a special hardcover bound edition, with the program bound in blue cloth covered boards with gilt Olympic Club titling on the front cover. SIGNED and INSCRIBED by FUZZY ZOELLER on the front pastedown. "Carl / Best Always / Fuzzy Zoeller (signed)". Likely inscribed to Carl Reichardt, as the book was acquired from the estate of CARL E. REICHARDT, b. 1931 d. 2017, who was President of Wells Fargo & Company from 1978 to 1983 and then Chief Executive Officer and Chairman of the Board of Directors until the end of 1994. He was an avid golfer. Hardcovers with program bound in, 8x11 inches, 266 pages. FINE condition, tight, bright, clean and unmarked.