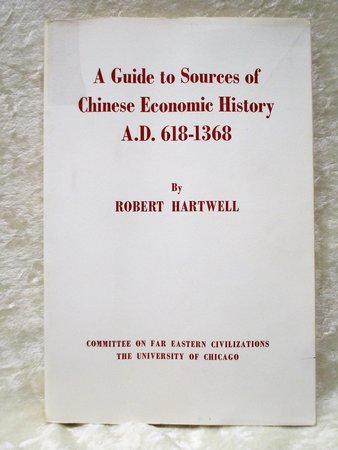 A GUIDE to SOURCES of CHINESE ECONOMIC HISTORY A.D. 618-1368, by ROBERT HARTWELL. Published by the Committee on Far Eastern Civilizations, The University of Chicago, Chicago, Illinois, 1964. SIGNED and INSCRIBED by the Author on the title page: "To Mr. Ang / With Best Wishes / Robert Hartwell". "Mr. Ang" is "Melvin Thlick-Len Ang", a Far Eastern scholar and colleague of Robert Hartwell. Softcovers, 6x9 inches, 257 pages. Includes numerous abstracts of economic documents by T'ang (A.D. 618 to 906), Sung (A.D. 960 to 1279), Chin (A.D. 1115 to 1234), and Yuan (A.D. 1260 to 1368) authors. GOOD condition, the rear cover has a 2 inch closed tear that has been repaired with clear tape that extends over the spine and the front cover, the spine has a crease, the front cover has a couple small pen marks,and there are light signs of handling including creases, bends, overall a solid copy with pages that are tight, bright, clean and clear. About ROBERT M. HARTWELL, b. 1932 d. 1995 (from a Harvard University website): ******From the beginning of his career at the University of Chicago and continuing during his tenure at professor of Chinese history at the University of Pennsylvania and into his retirement in Wyoming, the late Robert M. Hartwell was intensely concerned with the study of social and economic change in Chinese history. Working mainly with middle-period sources (mid-Tang into Yuan), he produced a number of unusually helpful research aids and a series of influential research articles. Readers of Hartwell's work will immediately notice that his research involved the citation of an unusually large number of sources on any given point and the collection of a considerable body of supporting data. Hartwell preferred to rely upon the preponderance of evidence; he rarely argued from the isolated example. He was in fact devoted to the collection of large sets of data and, finding a lack of this kind of research in the scholarly literature, he set out to create a body of extensive data sets himself. By the mid-1970s he had defined a program to amass the most extensive prosopographical data set ever created for the study of Chinese history for any period, and he continued his work with the help of students and especially his wife and collaborator Marianne Carlson Hartwell until his untimely death in 1995. The Hartwells willed their estate to the Harvard-Yenching Institute, in the conviction that Harvard would see to the preservation and dissemination of their research.******