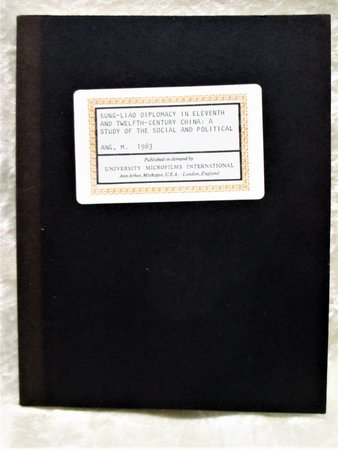 SUNG-LIAO DIPLOMACY in ELEVENTH and TWELFTH CENTURY CHINA: A STUDY of the SOCIAL and POLITICAL, by Melvin Thlick-Len Ang. This is an "authorized facsimile" printed in 1983 by University Microfilms International, Ann Arbor, Michigan, of the ORIGINAL DOCTORAL / PhD THESIS presented to the UNIVERSITY OF PENNSYLVANIA in the same year, 1983. Softcovers, 6.5x8.5 inches, xii + 316 pages. NEAR FINE condition, sunning to the spine, otherwise looks and feels unused, tight, bright, clean, clear and unmarked. Abstract of the Thesis: ****** In the early eleventh-century, geopolitical considerations caused the Chinese government to initiate a system of regular embassies of exchange with the Liao. The inauguration of permanent diplomatic relations between the two Courts represented a significant departure from the Sinocentric model of a China at the center of the social and political order. This study seeks to determine whether this alteration in the pattern of traditional Sino-barbarian relations led to a permanent institutional change or whether it was treated by the Chinese merely as a temporary if necessary expedient. The investigation moves from the general and theoretical to the specific and quantitative. The first chapter surveys the major theories of Sino-barbarian relations and traditional Chinese relations with Koryo, Annam, the Hsi Hsia, and the Chin. The second chapter presents an historical survey of Sung-Liao relations, including in particular the process by which decades of war were replaced by a century of peaceful diplomatic interchange. The third chapter details the actual process of Sung-Liao diplomacy: The selection of ambassadors; the ranks of appointees; the types of missions; the gifts exchanged; the nature of travel and hospitality. The fourth chapter presents a number of case studies of Sung ambassadors. An attempt is made to develop profiles of ambassadorial types. The fifth chapter presents the results of a prosopographical study of the careers of 608 ambassadors to the Liao and 341 military intendants who served in Liao-sensitive circuits. The effects of elite status, educational attainment, regional origin, and experience on the subsequent careers of ambassadors are analyzed. The data suggest that the Liao threat was taken seriously. Significant numbers of men in top policy making positions could boast ambassadorial experience. But these "experienced" bureaucrats did not become "specialists." Nor was any permanent bureau for foreign policy established as a result of the Sung-Liao diplomatic experience.******