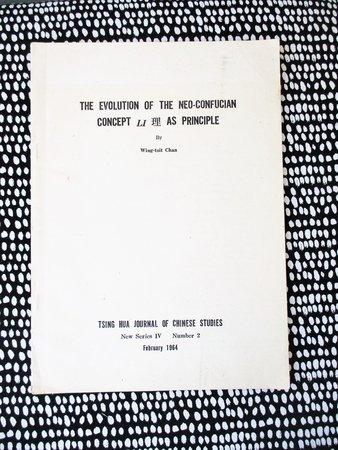 THE EVOLUTION OF THE NEO-CONFUCIAN CONCEPT OF LI AS PRINCIPLE, by WING-TSIT CHAN. A separately bound reprint from the Tsing Hua Journal of Chinese Studies, February 1964. Booklet, paper wrappers, staple bound, 7.5x10.5 inches, 27 pages (pages numbered 123 to 149). GOOD condition, upper corner creased, signs of light handling and use, red ink check marks in the blank margin beside quite a number of paragraphs, else solid, bright, clean and clear. An interesting and hard to find work from the philosopher Wing-Tsit Chan. About Wing-Tsit Chan (from Wikipedia): ******Wing=tsit Chan, b. 1901 d. 1994, was a Chinese scholar and professor best known for his studies of Chinese philosophy and his translations of Chinese philosophical texts. Chan was born in China in 1901 and went to the United States in 1924, earning a PhD. from Harvard University in 1929. Chan taught at Dartmouth College and Chatham University for most of his academic career. His 1963 book A Source Book in Chinese Philosophy was highly influential in the English speaking world, and was often used as a source for quotations from Chinese philosophical classics.******