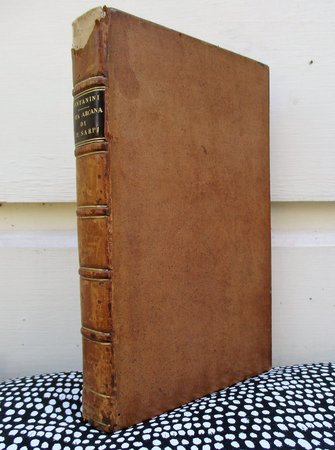 STORIA ARCANA Della Vita Di FRA PAOLO SARPI, Servita, by Monsignor Giusto Fontanini, Arcivescovo D'Ancira. In Partibus e Documenti Relativi. A BIOGRAPHY of PAOLO SARPI, an Important seventeenth century Venetian historian, scientist, canon lawyer, statesman, writer of works highly critical of the Catholic Church, and fervent proponent of the Separation of Church and State. You can read much about his life and influence on Wikipedia, excerpts of which are at the end of this listing. VENEZIA (Venice, Italy), Per Pietro Zerletti, 1803. First Edition. Hardcovers, calf leather covered boards, five raised spine bands, leather spine label titled in gilt, 5x8 inches, xvi, 488 pages. GOOD condition: There is a 3/4 inch chip to the leather covering at the top of the spine, the cover corner tips are worn, there is a scrape to the rear cover, overall the leather covers remain quite lovely. Internally, there is offsetting from the leather covers to the margins of the endpapers, light toning to the first few pages, some margin lines and marks in pencil here and there, overall the pages are nice, tight, bright, clean and clear. A solid, very presentable copy. About PAOLO SARPI (excerpted from Wikipedia): ******Paolo Sarpi, b. 1552 d. 1623, was an Italian historian, prelate, scientist, canon lawyer, and statesman active on behalf of the Venetian Republic during the period of its successful defiance of the papal interdict (1605 to 1607) and its war (1615 to 1617) with Austria over the Uskok pirates. His writings, HIGHLY CRITICAL of the CATHOLIC CHURCH and its Scholastic Tradition, inspired both Hobbes and Edward Gibbon in their own historical debunkings of priestcraft. As a defender of the liberties of Republican Venice and PROPONENT of the SEPARATION OF CHURCH AND STATE, Sarpi attained fame as a hero of Republicanism and Free Thought. His last words, "Esto perpetua" ("may she live forever" i.e. the Republic of Venice), were recalled by John Adams in 1820 in a letter to Thomas Jefferson, when Adams wrote "I wish as devoutly as Father Paul for the preservation of our vast American empire and our free institutions" (i.e. as devoutly as Fra Paoloa Sarpi had wished for the preservation of Venice and its free institutions.) Sarpi was also an experimental scientist, a proponent of the Copernican system, a friend and patron of Galileo Galilei, and a keen follower of the latest research on anatomy, astronomy, and ballistics at the University of Padua. His extensive network of correspondents included Francis Bacon and William Harvey. Sarpi believed that government institutions should rescind their censorship of Avvisi, the often anti Venitian newsletters which started to be common in his time. Instead of censorship Sarpi advised the Venetian government to publish their own newsletters to combat those of outsiders and agitators. Acting himself in that spirit, Sarpi published several pamphlets in defense of Venice's rights over the Adriatic. As such, Sarpi could be considered as an early advocate of the Freedom of the Press, though the concept did not yet exist in his lifetime.******