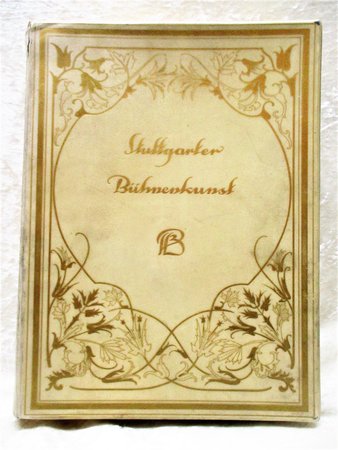 STUTTGARTER BÜHNENKUNST: INSZENIERUNGEN der Königlich Württembergischen Hofoper von Werken Mozarts und von Schillings' Mona Lisa, von EMIL GERHAUSER. (STUTTGART THEATER STAGE ART: the STAGING of Productions by the ROYAL WÜRTTEMBERG COURT OPERA HOUSE of Works by Mozart and of Schillings' Mona Lisa. By Emil Gerhauser.) Mit den künstlerischen Entwursen der Bühnenausstattung von BERNHARD PANKOK. (With the Artistic Designs by Bernhard Pankok.) Herausgegeben und Verlegt von (Edited and Published by) Wilhelm Meyer-Ilschen, Stuttgart, Germany, 1917. TEXT IN GERMAN. FIRST and LIMITED EDITION, this being copy number 99 of only 300 copies. An Elaborate and Finely Produced Book featuring the Production of 5 Operas by Mozart and 1 Opera, Mona Lisa, by Max von Schillings. Each was performed at the Hofoper in Stuttgart. VELLUM COVERS, GILT DESIGNS on the front cover and spine, gilt page edges, floral patterned endpapers, 9x12.25 inches (23x31 cm). Pagination: viii, 418 pages, plus unnumbered photogravures and lithographic plates. Beautifully ILLUSTRATED with 7 PHOTOGRAVURES and 52 PLATES (45 IN COLOR) of opera sets and costumes. Includes the frontispiece etching by Pankok. Each plate and photogravure is protected with a patterned tissue guard. There are also many in-text b&w drawings of set designs and staging directions. GOOD condition, the covers are bowing and lightly soiled, the upper spine corners are bumped causing 1 inch of splitting at the top front spine fold, there are some scratches to the gilt page edges; overall these vellum and gilt covers are quite attractive and impressive; internally there is some light foxing to the first and last few pages and just a bit here and there throughout, there is a previous owner's signature and the date of 1955 on a blank prelim, there is a small tape ghost on the front free endpaper, the tissue guards are toned, some with creases, but all are present, overall the pages are tight, bright, clean, clear and unmarked, and all the photogravures and plates are gorgeous. About EMIL GERHÄUSER (from Wikipedia): ******Emil Gerhäuser, b. 1868 d. 1917, was a German opera singer and director. Gerhäuser first began law studies at the University of Munich before receiving vocal training as a tenor. In 1890 he made his debut at the Munich Court Opera .In 1909 Gerhäuser moved to Stuttgart, where he became a director at the Hofoper / Court Opera.****** About BERNHARD PANKOK (from Wikipedia): ******Bernhard Pankok (Münster, b. 1872 d. 1943, was a modern German painter, graphic artist, architect, and THEATRICAL DESIGNER. His works are characterized by the transition between Art Nouveau and the International Style. His furniture and book design, such as the catalog of the German section for the 1900 Exposition Universelle in Paris, have garnered him international recognition. Pankok opened a studio in Munich in 1892 and worked as a freelance artist, graphic designer and illustrator for the magazines Pan and Jugend. He remained in Munich until 1902 and co-founded the Vereinigten Werkstätten für Kunst im Handwerk (United Workshops for Art in Handcraft). In 1902 he moved to Stüttgart, and in 1913 he helped found a local art school, the Stuttgarter Killesberg, and became the its first director. In 1914 he was considered one of the leading artists of the famous Werkbund Exhibition in Cologne. In 1930 he became a foreign member of the MUNICH SECESSION.(In 1933 the National Socialist party began their crusade to bring all forms of artistic expression under their control: a process known as Gleichschaltung . Artists were eventually required to obtain state endorsement for all of their works. Those who were considered degenerate were not allowed to paint, these included members of the Munich Secession. In 1938, the Munich Secession was dissolved as part of the Kulturellen Säuberung / Cultural Cleansing.)****** INTERNATIONAL BUYERS: This book is large and heavy and will require substantial additional shipping charges.