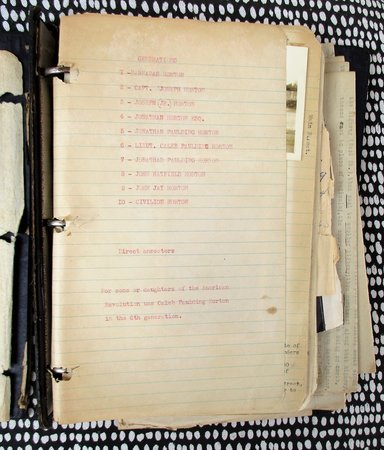 GENEALOGY of the HORTON FAMILY, direct descendants of BARNABAS HORTON, with transcribed CIVIL WAR LETTERS, VINTAGE PHOTOS, and other EPHEMERA. Three Ring Binder containing approximately 110 pages of 6x9.5 inch lined paper, along with laid in and mounted letters, photos and ephemera. Original typescript with numerous hand corrections and notes, mounted photos or newspaper clippings with handwritten notes, typed and handwritten letters, and other ephemera laid in, including a group of letters from 1904 by EDSON SALISBURY JONES, a noted Horton Family genealogist of the time. Of the GREATEST INTEREST are the many TRANSCRIBED LETTERS that were written DURING THE CIVIL WAR by JOHN JAY HORTON in 1862 and 1863 and by GEORGE G. HORTON in 1864 and 1865, and sent to their Sister and Mother from various Military Camps. Here are some excerpts: "John Jay Horton served in the battles of Merchantville, Williamsburg, Yorktown, Fair Oaks, Savage Station, Malvern Hill, Gaine's Mills, Seven Days, Golden Hill." There are 31 pages of transcribed letters by John Jay Horton and 19 pages by George G. Horton. The first letter has handwritten notes on it that identify "Sister" as Elmira Ireland Horton, "Father" as John Hatfield Horton, and "P.J." as Phebe Jane Horton. Here are a few excerpts from the letters: "Dec. 18, 1861...There is some talk of the 49th going to Pensacola and from good authority too. General Branen (Brannan) and Colonel Bidwell have both made a requisition to General McClellan to go..." "May 30, 1862, Chickahominy Creek... Elmira thinks the war will not be over by July, but I think by the first of July there will not be much left undone..." "June 26, 1862, Camp Lincoln... The cannon are firing almost as fast as any one can count... I was in the battle of Mechanicsville and in the skirmish at Yorktown, and in that shower of balls that came from the Rebel rifle pits at Yorktown in front of dam number 2... But stop, anyone is more likely to die with disease than he is to be shot in action..." "July 5, 1862. City Landing... We lost nine men and the Rebels 180 in killed and wounded so you see it don't do for the Rebels to attack us on our own ground. A fight took place this evening, there was about 200 Rebels killed and wounded they did not get through our picket line. There has been a fight every day since the 25th. The first three days of the hard fighting was on the other side of the creek, Chickahominy..." "Camp Near Harrison's Landing, July 11th, 1862... There was about twelve killed and wounded in the 49th New York... the worst place was at Golden's Hill where we were all resting as we had been traveling nearly all night and the previous day. The opened fire from several batteries on us from the woods... There is but 30 men for duty in the Company now and we had 85 when we first came out here..." "Dec. 17, 1864... I have been in eight fights and have not been hit yet, only my clothes. If you watch the papers you will find that the 34th has been in some hard battles in the Shenandoah Valley..." There are SEVEN ORIGINAL EARLY PHOTOS of HORTON FAMILY members. They are: a Cabinet Card photo of JOHN HATFIELD HORTON, a clipped Cabinet Card photo of PHOEBIE EMMA BARMORE (wife of John Jay Horton), a tintype of JOHN JAY HORTON, a 1917 photo of LAVINIA E. HORTON, a CDV of ELMIRA A. HORTON, a CDV of Anna Park Horton, a CDV of PHOEBIE FONES, and an early photo of Lavinia M. Horton. There are also some snapshots (1950s?) of Horton graves and landmarks. CONDITION: The front and rear covers of the binder are disbound, the blank endpapers and first and last few pages have torn away from the metal rings, some other pages are also loose, some pages are age toned; some pages, letters, and paper ephemera are worn at the edges; overall the pages remain bright, clean and clear, and the typing and writing is all fully legible.ONE OF A KIND Family Compiled HORTON GENEALOGY that follows its direct line from Barnabas Horton.