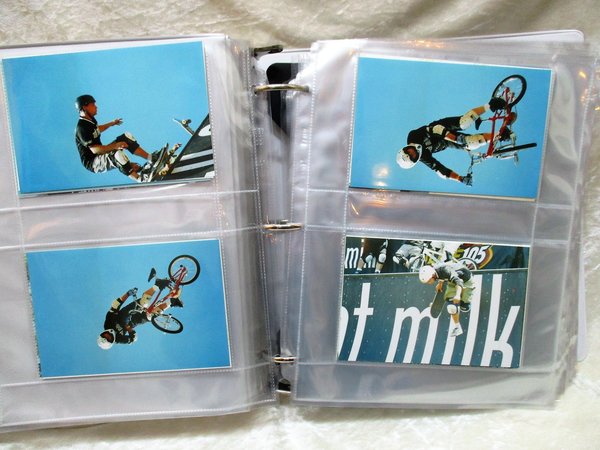 GOT MILK GRAVITY TOUR : 174 PHOTOS of the EXTREME SPORTS CAMPAIGN TOUR to PROMOTE MILK. A 3 ring binder holding plastic sleeves with pockets for 2 photos on a side. The photos are mostly in color and measure 6x4 inches, about 30 of the photos are in b&w and somewhat smaller in size. The photos are mostly of the EXTREME SPORT ATHLETES in ACTION on BIKES and SKATEBOARDS and even one on INLINE SKATES, performing at various locations of the GOT MILK GRAVITY TOUR.

The photos show athletes in the air and on the ground performing "Gravity Defying" stunts at various arenas where the tour event took place. Some of the photos are of crowds behind GOT MILK advertising barriers.

These photos are of the 2000 GOT MILK GRAVITY TOUR and I do not know exactly who the athletes that year were, but those of you who know your extreme athletes will be sure to recognize at least some of them. Thirty of the photos are b&w group publicity photos in front of a GOT MILK backdrop.

******The Got Milk Gravity Tour will feature skateboarders, BMX bike riders, and even an inline skater. The following people will be participating at the Stockton event: CHRIS GENTRY is a professional skateboarder who is ranked as one of the top ten Vert competitors in the world. At the 2000 X Games, Chris placed seventh in Vert Competition and fourth in Vert Doubles. JOHN PARKER, whose name is synonymous with BMX riding, placed fourth in the 2000 X Games in BMX Vert. He consistently places in the top 5 in every contest he enters. CHRIS LIVINGSTON was a vert skateboard Finalist in the 1997 Vans/Hard Rock Triple Crown of Skateboarding. ART THOMASON specializes in flatland bicycle stunts, in which he finished 10th in the world at the 1999 ESPN X Games. Before his professional career, he won the amateur flatland title in the 1996 ESPN Destination Extreme series. JIM BURGESS is an ESPN X Games competitor and consistent top 10 finisher in professional contests. JEFF FERRIS, team manager/skateboarder, was a finalist in the 1998 Vans Shoes World Skateboard competition. BILL ROBERTSON is the veteran on the Gravity Team. Bill has been skateboarding for more than 20 years. He specializes in "old-school" flatland skateboarding, wowing the crowds with spins, kickflips, and handstands. When not skating, Bill is the tour master of ceremonies.******

PLEASE INSPECT THE PHOTOS TO SEE IF THESE ATHLETES WERE IN THE 2000 TOUR.

All the photos are in VERY GOOD condition, bright, clean and clear.

INCLUDED with the binder full of photos is an unopened / sealed copy of the GRAVITY TOUR MILK CD (produced in 1999).

Comes from the St. Helena, California, estate of an ADVERTISING MAN.

INTERNATIONAL BUYERS PLEASE NOTE: This item is heavy and will require substantial additional shipping charges. After placing your order you will be notified of the additional charges and be able to accept or reject them before your payment is processed. Or you can contact us ahead of time to find out the shipping charge to your country. Thanks.