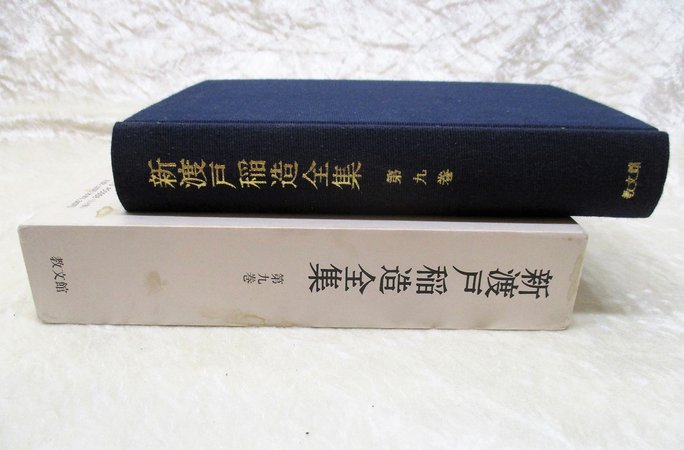 FIVE LECTURES by the Late DR. INAZO NITOBÉ on CARLYLE'S SARTOR RESARTUS / NITOBE INAZO COMPLETE WORKS VOLUME 9. Edited by T. Jodal, T. Saito, & Y. Takagi. Published by Kyobunkan, Japan, 1969. This is Volume 9 in the Series of Complete Works of Nitobé Inazo. ISBN: 4764222094 / 978-4764222090. Hardcover Book in Slipcase, blue cloth covered boards, gilt titling on spine, 5x7.5 inches (13x19 cm), 462 pages. TEXT IN JAPANESE with original ENGLISH PASSAGES from the CARLYLE WORK "Sartor Resartus" throughout. NEAR FINE condition book, tight, bright, clean and unmarked; in a GOOD slipcase that has some shelf rubbing, light soiling, and a few coffee drop stains, but is still solid and doing its job well. About Nitobe Inazo (extracted from Wikipedia): ****** Nitobe Inazo, b. 1862 d. 1933, was a Japanese economist, author, educator, diplomat, politician, and religious scholar. In 1884, Nitobe traveled to the United States where he stayed for three years, studying economics and political science at Johns Hopkins University. While there he became a member of the Religious Society of Friends (Quakers). It was through a Quaker community in Philadelphia that he met Mary Patterson Elkinton, whom he eventually married. In 1891, after obtaining a PhD from Halle University, Germany, (the first of five doctoral degrees he was to earn from various universities), he became a professor at his alma mater, the Sapporo Agricultural College. At that time he had already published books in English and in German. Nitobe continued his teaching tenure at Sapporo until 1897 following which he spent time writing in both Japan and California. One of the books he wrote during this period was BUSHIDO: THE SOUL OF JAPAN. When the League of Nations was established in 1920, Nitobe became one of the Under-Secretaries General of the League, and moved to Geneva, Switzerland. He became the director of the International Bureaux Section, in charge of the International Committee on Intellectual Cooperation (which later became UNESCO under the United Nations' mandate). His legacy in this period includes the settlement of territorial dispute between Sweden and Finland over the Swedish speaking Åland Islands. In its resolution, the Islands remained under the Finnish control, but adopted complete disarmament (i.e., no military presence on the islands) and granted autonomy, averting a possible armed conflict. Nitobe, however, is perhaps most famous in the west for his work Bushido: The Soul of Japan (1900), which was one of the first major works on samurai ethics and Japanese culture written originally in English for Western readers (The book was subsequently translated into Japanese and many other languages). It was not until the 1980s that Bushido: The Soul of Japan reached the height of its popularity in Japan. It is now the most widely available work on the subject of bushido. In the West, Bushido: The Soul of Japan has been a best-seller since the outbreak of the Russo-Japanese War of 1904-1905. It has been translated into dozens of languages.******