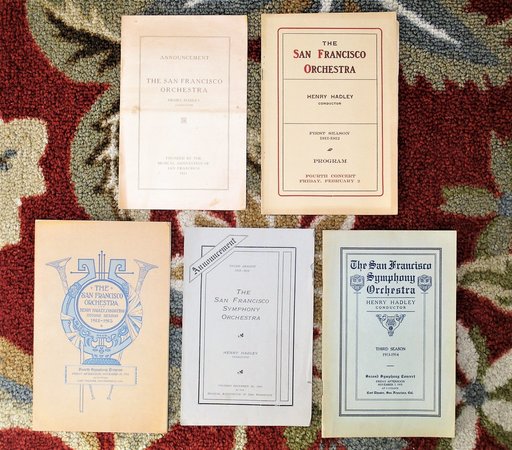 "The Musical Association of San Francisco... establishing a permanent orchestral body along the lines of those maintained in the larger cities of Europe... For the first season, the concerts will be given in the afternoons as the formation of the Association was so late that it was impossible to secure sufficient musicians for evening concerts, but plans are being laid for both afternoon and evening concerts next season... All the objects and ambitions of the Association cannot be attained the first season, but an earnest start will be made, with the view to having an orchestra equal to any in the country and achieving the highest results both from an artistic and educational standpoint, within a few years...The announcement of the first series of Symphony concerts is herewith submitted for your kind consideration..." (2) 1912 FIRST SEASON, Fourth Concert, PROGRAM, performed on February 2, 1912. Booklet, side stapled, 6x9 inches, 20 pages including covers. (3) 1912 SECOND SEASON, Fourth Concert, PROGRAM, performed on November 29, 1912. Booklet, side stapled, 6x9 inches, 28 pages including covers. This symphony featured TINA LERNER, PIANIST playing Beethoven and Tschaikowsky. From Wikipedia: "An audience that represented the wealth and culture of San Francisco went into ecstasies of delight over her remarkable playing of the Tchaikovsky Concerto at the recently formed San Francisco Symphony, according to the San Francisco Orchestra's manager, Frank W. Healy." (You can read more about her on Wikipedia.) (4) 1913-1914 ANNOUNCEMENT of the THIRD SEASON of the THE SAN FRANCISCO SYMPHONY ORCHESTRA. Pamphlet, side stapled, 5.5x8.5 inches, eight pages including covers. (5) 1913 THIRD SEASON, Second Concert, PROGRAM, performed on November 24, 1913. Booklet, side stapled, 6x9 inches, 28 pages including covers. The concert featured the Operatic Soloist ERNESTINE SCHUMANN-HEINK. CONDITION: The Announcements and Programs are in FAIR to GOOD MINUS condition, they are lightly toned, a few have been folded, there is edge wear, some small closed tears, and other signs of handling; overall they are complete, bright, clean and clear. A nice group of RARE, ORIGINAL Announcements and Programs from the BEGINNING of the Great SAN FRANCISCO SYMPHONY. From the San Francisco Symphony website: ******In the wake of the devastating 1906 earthquake and fire, San Francisco's civic leaders set about creating a permanent orchestra in the music loving city.

In December 1911, the San Francisco Symphony (SFS) gave its FIRST CONCERTS, rekindling the city's cultural life. It delighted audiences with a kaleidoscopic mix of classics and new music.******