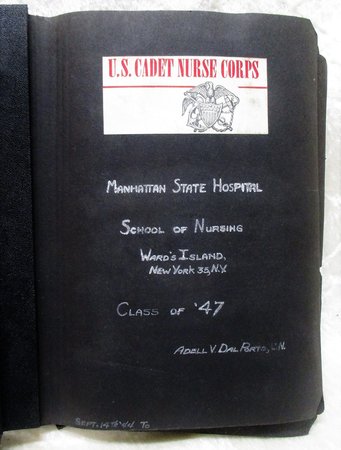 PHOTO ALBUM of ADELL V. DAL PORTO, a NURSE at the U.S. CADET NURSE CORPS, MANHATTAN STATE HOSPITAL SCHOOL OF NURSING, WARD'S ISLAND, NEW YORK. She was in the Class of 1947 and the photos that have dates written below them were all taken during the WORLD WAR II era years of 1944 and 1945. 135 snapshots of Adell and her friends, nurse colleagues, classmates, etc., both in and out of their nurse outfits, both at work and play. The snapshots seem to have been mostly taken at the School of Nursing, Ward's Island, New York, with some apparently taken in various other New York City locations. Many of the snapshots are annotated in white on the black album pages, some with first names, some full names, some with places, some with dates, some with names places and dates, etc. Bound in a hardcover "Kodak Library" photo album, 7x9 inches, 50 album leaves (100 pages). Photos are mounted with photo corners on each side of the leaves (i.e. the photos are easily removed). The 135 snapshots are 2.5x3.5 inches, some 3.5x4.5, a few larger, a few smaller. Approximately 1/3 (maybe more) of the photos that were originally in the album are missing, either they fell out at some point or were removed (i.e. only their photo corners remain), but, again, 135 photos are present. Condition: The album leaves are bound into the album with two metal brackets one of which has broken, so the leaves are held in place mainly with the lower bracket. The photographs are mostly sharp, bright, clean and clear, though some have lightly faded with age. The handwritten information is clear and fully legible. The album covers are shaky at the spine but are still solid. An interesting insider's look at the U.S. Cadet Nurse Corps, Manhattan State Hospital School of Nursing, Ward's Island, New York, during 1944 and 1945.