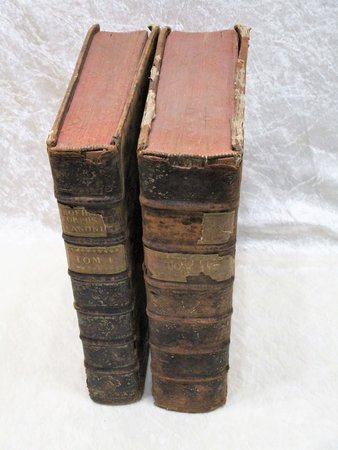 CORPUS IURIS CANONICI GREGORII XIII Pontif. Max. Auctoritate Post Emendationem Absolutam Editum: In DUOS TOMOS Divisum et APPENDICE Nova Auctum. JUSTUS HENNING BÖHMER (aka BOEMER). TWO VOLUME SET. HALAE MAGDEBURGICAE (HALLE / Halle an der Saale, GERMANY) Impensis Orphanotrphei MDCCXLVII (1747). Text in Latin. TWO VOLUMES, leather covered boards, six raised spine bands, leather spine title labels, marbled endpapers, 8.5x11 inches (22.5x27.5 cm). Pagination: Volume I: [4], lxxxviii pages, 1240 columns (2 columns per page), [3] pages. Volume II: [2], lvi pages, 859 columns (2 columns per page). Volume I has a copper engraved frontispiece portrait of Benedict XIV by Martin Tyroff, and a copper engraved printer's device on the title page. Both Volume I and II have head and tail piece engravings and ornamental initials. CONDITION: The leather covers on both bindings are scraped, rubbed, worn through at the corners and edges, chipped at the spine ends, and the spine labels are substantially chipped away; there is a some worming to the bottom edge and corners of the covers of Volume II; despite the wear, the covers are solid, still doing their job well, and attractive in a Harry Potter Hogwarts Library sort of way. Internally, the front and rear inner hinges are split but holding well with the cord binding, the pages are lightly toned and foxed throughout and have some corner creases and other signs of wear here and there, the title page has some paper repair to its top margin that affect the top portion of the first words (they are still fully legible); overall the pages are tight, bright, clean and clear. SCARCE 1747 TWO VOLUME SET on LAW by the highly influential BOHMER. These tomes would look great on the SHELF of any LAWYER or LEGAL SCHOLAR, or in the bookcase of anyone who appreciates rare, interesting old books! About JUSTUS HENNING BÖHMER (from Wikipedia): ******Justus Henning Böhmer (b. 1674 in Hanover, d. 1749 in Halle) was an outstanding German jurist, ecclesiastical jurist, Professor of the University of Halle; and also Geheimer Rat, Count Palatine and Chancellor of the Duchy of Magdeburg. In the judicial field initially he was a protectionist of the existing "territorial system" or Erastian theory of ecclesiastical government, but in the following years he tended towards the natural right and "Kollegialismus". In his first great work, "Jus Ecclesiasticum Protestantiun" he drew on the traditional Canon Law, but he reformed the law so that it was exempted from rigid orthodoxy, principles, resistance and dogmatism. Affected by the ideas of the Age of Enlightenment he represented an increasing critical and scientific development instead of a religious fundamentalism. Böhmer's legal thinking predominated in Protestantism church law of the 18th century, and was the basis for numerous church reforms yet to be. His results in the domain of civil law were of similar importance. In his next main work "Introductio in Jus Digestorum", a pandects-compendium which was maintained until the 20th century, he liberated the traditional German law from the influence of the old Roman law and thus prepared the basis of "general Landrecht (law code) of the Prussian states". A huge amount of further significant and notable works on civil and church law as well as expertises were penned by him, and were published by his son Georg Ludwig Böhmer after Justus Henning's death in the collected edition "Exercitationes ad Pandectas".****** INTERNATIONAL BUYERS PLEASE NOTE: These two large books are heavy and will require substantial additional shipping charges. After placing your order you will be notified of the additional charges and be able to accept or reject them before your payment is processed. Or you can contact us ahead of time to find out the shipping charge to your country. Thanks.