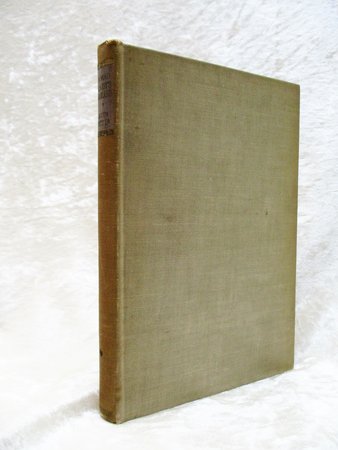 A MAD LADY'S GARLAND, by RUTH PITTER. Published by the Macmillan Company, New York, 1935. A book of poems. INSCRIBED, SIGNED and DATED by JOHN HOLMES, Poet and Tufts University Professor of Literature and Poetry, and PRESENTED to his then student JOHN CIARDI. "John Ciardi, HIS Book, / on and after Dec. 7, 1937 / from John Holmes". Clearly this was John Holmes' personal copy which he was gifting to John Ciardi. Ruth Pitter must have a favorite poet of both of these male poets. Several of the poems have brief handwritten pencil notes and marks beside and on them, likely by either John Holmes or John Ciardi. FAIR condition, the covers are soiled, the spine is sunned / darkened and its lettering is no longer visible; internally there is glue remnant to the front free endpaper likely from the removal of a bookplate, light toning to the pages, otherwise tight, bright, clean and clear. A solid copy. An interesting intersection of John Holmes, John Ciardi, and Ruth Pitter, all in one place. About RUTH PITTER (from Wikipedia): ******Emma Thomas "Ruth" Pitter, CBE, FRSL, b.1897 d.1992, was a 20th century British poet. She was the first woman to receive the Queen's Gold Medal for Poetry in 1955, and was appointed a CBE in 1979 to honour her many contributions to English literature. In 1974, she was named a "Companion of Literature", the highest honour given by the Royal Society of Literature. She was a good friend of C. S. Lewis, who admired her poetry. He often invited her critique of his poems. Pitter is considered by many Lewis scholars to have had an effect on his writing in the 1940s and 1950s. W. B. Yeats, Robin Skelton and Thom Gunn also appreciated Pitter's work and praised her poetry. Lord David Cecil once remarked that Pitter was one of the most original and moving poets then living. Despite some praise Pitter has been mostly overlooked. It is only in recent years that there has been a renewed interest in her work.****** About JOHN HOLMES (from Wikipedia): ******JOHN HOLMES, b.1904 d.1962, was a poet and critic. He was born in Somerville, Massachusetts, and both attended and taught at Tufts University where he was a professor of literature and modern poetry for 28 years. His students included Anne Sexton, Richard Wilbur, May Sarton, John Ciardi, Maxine Kumin, and many others. He wrote ten volumes of poetry, but it was his influence on a generation of poets that was his greatest contribution to poetry.****** About JOHN CIARDI (from Wikipedia): ******John Anthony Ciardi, b.1916 d.1986, was an American poet, translator, and etymologist. While primarily known as a poet, he also translated Dante's Divine Comedy, wrote several volumes of children's poetry, pursued etymology, contributed to the Saturday Review as a columnist and longtime poetry editor, and directed the Bread Loaf Writers' Conference in Vermont. In 1959, Ciardi published a book on how to read, write, and teach poetry, How Does a Poem Mean?, which has proven to be among the most used books of its kind.******