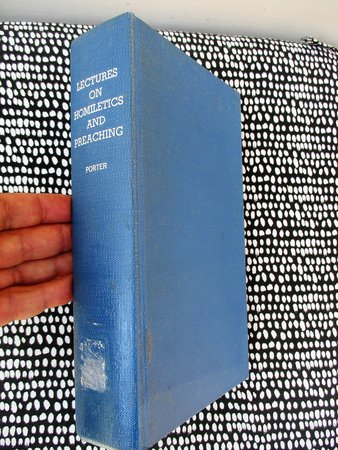 LECTURES ON HOMILETICS AND PREACHING and on PUBLIC PRAYER together with SERMONS AND LETTERS, by EBENEZER PORTER, President of the Theological Seminary, Andover, Massachusetts. (For those of us who did not know, homiletics is the art of writing and preaching sermons.)

BOUND TOGETHER with LECTURES ON ELOQUENCE AND STYLE, also by EBENEZER PORTER.

LECTURES ON HOMILETICS AND PREACHING and on PUBLIC PRAYER was PUBLISHED by Flagg, Gould and Newman, New York, 1834. First Edition.

LECTURES ON ELOQUENCE AND STYLE was PUBLISHED by Gould and Newman, New York, 1836. First Edition.

Rebound in Library Hardcovers, blue cloth covered boards, white titling to the spine, new endpapers, entire original works bound in, each with its own title page to last page, pages of both works are numbered consecutively, 606 total pages.

Ex Central Bible College Pearlman Memorial Library, with associated stamps and labels on the covers, endpapers, and stamped on the page edges; there is also a single ex lib stamp on the title page that seems to be the only stamp on the actual pages of text. Ex library aside, the book is in GOOD condition, two leaves consisting of pages 9/10 and 69/70 have 4 inch closed tears starting at the bottom edge that have been repaired with clear tape, one of the tears is slightly separated and affects a few words, the other closed cleanly; there is foxing throughout, mostly light on the Homiletics and Preaching work, a bit heavy on the Eloquence and Style work; otherwise the pages are all well bound, bright, clean, clear and unmarked.

About EBENEZER PORTER D.D. ( from Wikipedia):

The son of Vermont politician and judge Thomas Porter, Ebenezer was born in Cornwall, Connecticut on May 5, 1772. He graduated from Dartmouth College in 1792, studied theology in Bethlehem, Connecticut, and in 1796 became pastor of the Congregational church in Washington, Connecticut.

Porter died in Andover, Massachusetts, on April 8, 1834. He is buried in Phillips Academy Cemetery.******