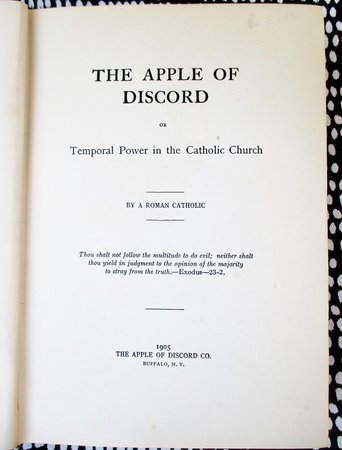 THE APPLE OF DISCORD, or TEMPORAL POWER in the CATHOLIC CHURCH, written by "A Roman Catholic", known to be Reverend George Zurcher.

Appears to be an argument for the separation of Church and State. Details how Greed the desire for Temporal Power has damaged the Catholic Church throughout history.

Previously owned by MONSIGNOR JOSEPH M. GLEASON, b.1869 d.1942, a Californian Catholic priest, educationalist, historian and COLLECTOR OF BOOKS AND PHOTOGRAPHS. His bookplate is on the front pastedown.

Also previously owned (probably subsequently) by REVEREND GEORGE W. SOUTHWICK, b.1918 d.2006, a well known figure in Southern California Pentecostal Churches. He was ordained in four different Pentecostal denominations: International Church of the Foursquare Gospel; Assemblies of God; Whosoever Will; and Apostolic Holiness. He was also a noted COLLECTOR OF THEOLOGICAL BOOKS AND PERIODICALS, and his collection was said to contain over 4,000 books and periodicals. After his death his collection found its way to the Flower Pentecostal Heritage Center. His collection focused on minor traditions within pentecostalism, e.g. Oneness, Anglo-Israel, Calvinist, and Latter Rain beliefs. This book was deaccessioned from the Flower Pentecostal Heritage Center.

CONDITION: Ex library with a shelving number etched at the bottom of the spine, some stamps and marks on the copyright page, and paper remnants, probably of labels and a card pocket, on the rear endpapers. Ex lib aside the book is in GOOD condition, the covers have a few rubs, and light wear to the corners and spine ends; internally, there is a previous owner's bookplate and a different owner's signature on the front pastedown, as noted above, there is a crease to the upper corner of the latter half of the pages, otherwise tight, bright, clean and clear.