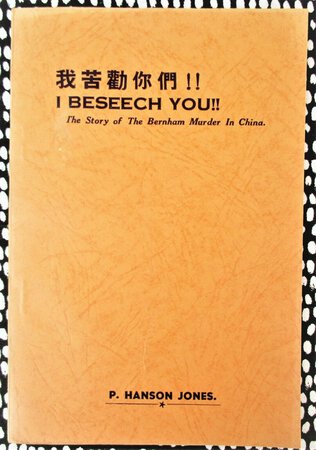 I BESEECH YOU! The Story of the BERNHAM MURDER IN CHINA, by P. Hanson Jones.

Rare biography of Max and Emily Bernheim (also spelled Bernham), early Pentecostal missionaries to China who, along with their son David, were murdered by "Communist Airmen". The Bernheims were in China from 1936 until 1940, when they were murdered.

Published by Windmill Printing Company, Hong Kong, undated but circa 1960.

The author, Philip Hanson Jones, was a Pentecostal Missionary to China in the 1950s.

SCARCE. This is the only copy I have or have ever seen.

I found this interesting item on the ASIAN CENTER FOR PENTECOSTAL THEOLOGY website blog:

******Recently I was privileged to visit a church near the city of Qujing in Yunnan Province. This church was established by Pentecostal missionaries, Max and Emily Bernheim, in the 1930s. The Bernheims, along with one son, were murdered by bandits in 1940. This tragic event left their five remaining children orphans. The bodies of Max, Emily, and their son, David, had not been found until late in 2015. The church discovered the exact site of their burial and moved their bones to the church's current location in 2016. In June of this year (2017) a Chinese Christian brother notified me of this more recent development. So, along with a group of friends, I visited the burial site and found a beautiful memorial stone marking the Bernheim's grave. More significantly, I found that the church they planted (there were about 50 believers in 1940) is vibrant and thriving. The local Chinese believers repeatedly expressed their thankfulness for the Bernheim's ministry and sacrifice. The church now numbers over 700 and the church leaders were deeply aware of their rich legacy. They noted with thankfulness the truth of Tertullian's words, "The blood of the martyrs is the seed of the church".******