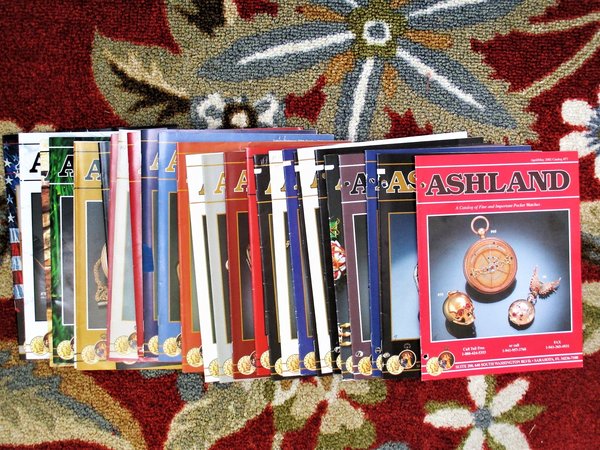 29 CATALOGS of ASHLAND : A CATALOG of FINE and IMPORTANT POCKET WATCHES 2002-2015 Illustrated

Softcover Catalogs, side stapled, 8.5x11 inches. Most have 24 pages, including covers.

Each watch is nicely described and priced. Fully ILLUSTRATED with COLOR PHOTOGRAPHS of the watches being offered.

CONDITION: These catalogs were previously owned by a POCKET WATCH COLLECTOR. There are his relevant notes and marks throughout, including circling, underlining and sometimes yellow highlighting of many items of interest to him, many notes here and there, including on the covers of a few issues, etc. Five of the issues are triple hole punched at the left margin, presumably the collector planned to keep the catalogs in a three ring binder but changed his mind after a bit. Otherwise the issues show just light signs of handling and use, still complete, solid, clear and bright.

A great look at important and rare pocket watches, many of which are only to be seen in these catalogs.

INTERNATIONAL BUYERS PLEASE NOTE: These 29 catalogs will require substantial additional shipping charges. After placing your order you will be notified of the additional charges and be able to accept or reject them before your payment is processed. Or you can contact us ahead of time to find out the shipping charge to your country. Thanks.