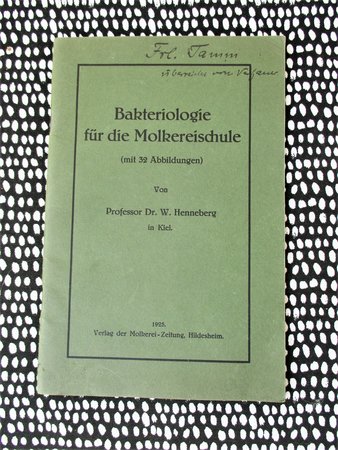 PRESENTATION COPY from the AUTHOR to FRAULEIN TAMM. Inscribed at the top of the front cover: "Fräulein Tamm / Überreicht vom Verfasser" (Miss Tamm / Presented by the Author).

Interestingly, Fraulein Tamm (Herta Irene Tamm) studied dairy bacteriology under Dr. Henneberg in Kiel, then later emigrated to Los Angeles where her first job was as a bacteriologist at a local dairy. There is a nice obituary on Herta Irene Mock (née Tamm) on the SF Gate website.

Booklet, paper covers, side stapled, 6x8.5 inches (14x27 cm), 56 pages. Laid in are two pamphlets on cultures and bacteriology of Yoghurt and Kefir. One is 2 pages, the other 4 pages.

VERY GOOD condition booklet, just lightly used and still tight, bright, clean and clear. The two laid in pamphlets have been folded, are toned, and both have a bit of handwriting at the top in German which I cannot translate.

About Wilhelm Hermann Henneberg (from Wikipedia, roughly translated from the German by Google):

was a German bacteriologist and first director of the Bacteriological Institute at the Prussian Experimental and Research Institute of Dairy.

In his last years he devoted himself to the study of the saprophyte flora of the intestine and the human intestinal flora, in particular their conversion by the consumption of dairy products such as yoghurt and acidophilus milk.******