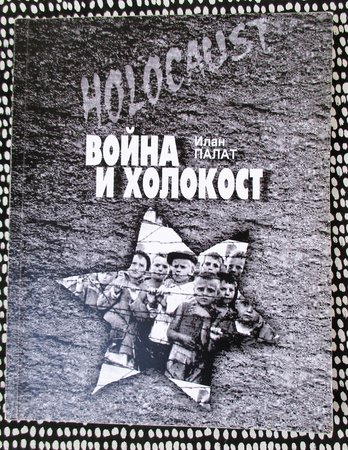 WAR AND THE HOLOCAUST, by ILLAN PALAT.

TEXT IN RUSSIAN, except for an 8 page section in English.

About the author ILLAN PALAT (from the BLAVATNIK ARCHIVE website):

******Illan Palat was born on April 10, 1924, in Ukraine. When he was three, his family had their property confiscated and was forced to move to the Jewish Autonomous Oblast. They lived and worked in Birofeld, a local kolkhoz, until Palat's father learned accounting and relocated his family to Birobidzhan. Palat was drafted in October 1942, underwent infantry training, and was sent to the front. His first combat experience was in the Battle of Kursk, where he fought on the front line in a 45mm anti-tank artillery unit. The battles were brutal, and Palat's unit suffered heavy losses. There were intermittent shortages of food and water, but there was also a strong sense of camaraderie among all soldiers, regardless of their backgrounds. In late 1943, Palat was severely wounded in the leg; he was saved by another solider, who carried him off the battlefield and into a local house. After eight months of hospitalization and multiple surgeries, Palat returned to Birobidzhan on crutches. Of the forty-three young men who were drafted from Birobidzhan with him, only two would come back. After demobilization, Palat worked as a watchmaker in Birobidzhan, until doctors advised him to move to a warmer climate because of his wound. In 1947, Palat moved to Tbilisi, Georgia, where he worked in construction. In 1977, he moved to United States and lived in New York and San Francisco. In addition to working as a contractor, he wrote the books A SOLDIER FROM BIROBIDZHAN and THE WAR AND THE HOLOCAUST.******