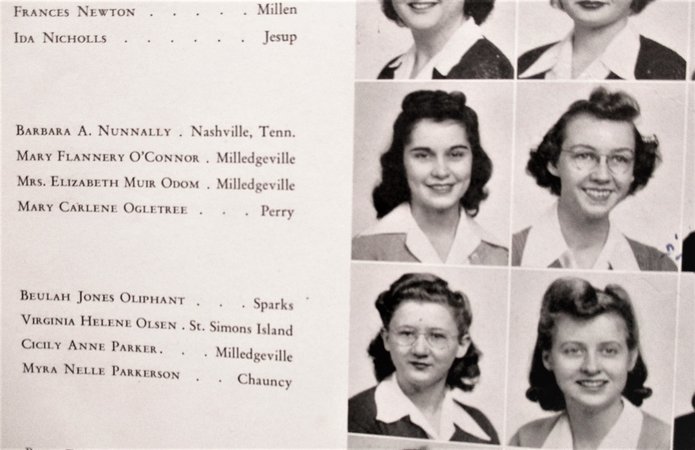 THE SPECTRUM 1944 / The COLLEGE YEARBOOK of Georgia State College for Women, Milledgeville, Georgia.

Flannery O'Connor's name and photograph appears in a number of places, as do 8 of her original art linocuts. She was an active student involved with the Town Girls Club, the International Relations Club, The Corinthian (the creative writing journal), the Colonnade (the student newspaper), and the Spectrum Yearbook.

Here is a rundown of where she is mentioned and the photos in which she appears:

Here is where to find her satirical linocut art drawings:

This copy belonged to a Margaret who was nicknamed "Dublin". The volume bears inscriptions from classmates to her throughout, though nothing I can find from O'Connor.

VERY GOOD condition: the covers have light wear at the spine ends and corner tips, the raised spine lettering and embossed front cover titles and design have faded but remain clear; internally very nice, tight, bright and clear. A previous owner has placed removable tags at the top of the pages where there is a photograph, mention, or drawing by Flannery O'Connor. I have carefully removed and replaced one tag to make sure they could be removed. They DO remove but are stickier than normal post-its, so if you remove them please do so with care.

What a GEM. With lovely and cute photos of Flannery O'Connor as an active college sophomore. She is in more photos than I would have imagined, and the book has her early satirical art as well! Makes me want to read her books again.

A couple related items from the Internet:

From the Georgia College at Milledgeville website: "1942 - Mary Flannery O'Connor enters as a freshman. Active in student publications, she graduates three years later and becomes one of the South's most noted writers."

From Wikipedia: "Flannery O'Connor entered Georgia State College for Women (now Georgia College & State University) in an accelerated three year program and graduated in June 1945 with a social sciences degree. While at Georgia College, she produced a significant amount of cartoon work for the student newspaper. Many critics have claimed that the idiosyncratic style and approach of these early cartoons shaped her later fiction in important ways."