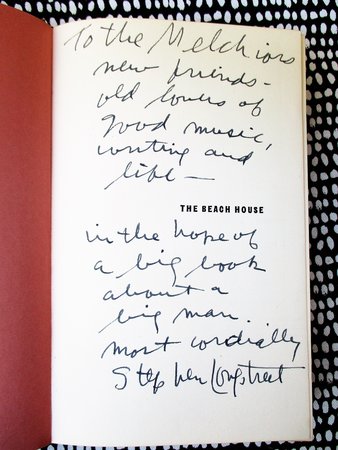 SIGNED and INSCRIBED by STEPHEN LONGSTREET on the half title page to the famous Opera Tenor LAURITZ MELCHIOR.

Also SIGNED by LAURITZ MELCHIOR on the front pastedown, presumably his ownership signature.

The inscription by Longstreet to Melchior reads:

"To the Melchiors / new friends - old lovers of good music, writing and life - in the hope of a big book about a big man. / Most cordially / Stephen Longstreet".

A little research uncovers the fact that Henry Holt and Company, publisher of THIS book in 1952, announced in the same year that it was planning to publish a book on Lauritz Melchior to be written by Stephen Longstreet. Obviously that is why Longstreet's inscription in this book states "in the hope of a big book about a big man". (Publisher's Weekly Volume 162, dated 1952, includes the statement "Holt also plans to bring out a biography of the Danish Tenor, Lauritz Melchior, written by Stephen Longstreet.") The book apparently was never published.

GOOD condition, the covers have wear to the spine ends and corner tips, and some shelf rubs, but remain solid and bright; internally, there are five pages, 137-141, that have light dark stains across them (the text is fully clear and legible beneath the stains), otherwise the inner pages are tight, bright, clean and clear.

RARE with the SIGNATURES of both LONGSTREET and MELCHIOR and with the interesting INSCRIPTION.

About STEPHEN LONGSTREET (from his L.A. TIMES Obituary):

******Stephen Longstreet (1907-2002) was an artist, screenwriter and bestselling author of numerous fiction and nonfiction books. An artist by training whose best known artwork provides a firsthand chronicle of the dynamic and colorful world of jazz during the 20th century.

Longstreet wrote many critically acclaimed and bestselling novels and works of nonfiction. He was also a noted screenwriter. Under contract at Warner Brothers in the 1940s, Longstreet wrote "The Jolson Story" and also "Stallion Road," based on his novel of the same name and starring Ronald Reagan. He later wrote "The Helen Morgan Story," and as a television writer in the '50s and '60s he wrote for "Playhouse 90." He even wrote the book for the hit 1947 Broadway musical "High Button Shoes," which was based on his novel, "The Sisters Liked Them Handsome."******

About LAURITZ MELCHIOR (from Wikipedia):

******Lauritz Melchior (20 March 1890 - 18 March 1973) was a Danish-American opera singer. He was the pre-eminent Wagnerian tenor of the 1920s, 1930s, and 1940s and has since come to be considered the quintessence of his voice type. Late in his career, Melchior appeared in movie musicals and on radio and television. He also made numerous recordings.******