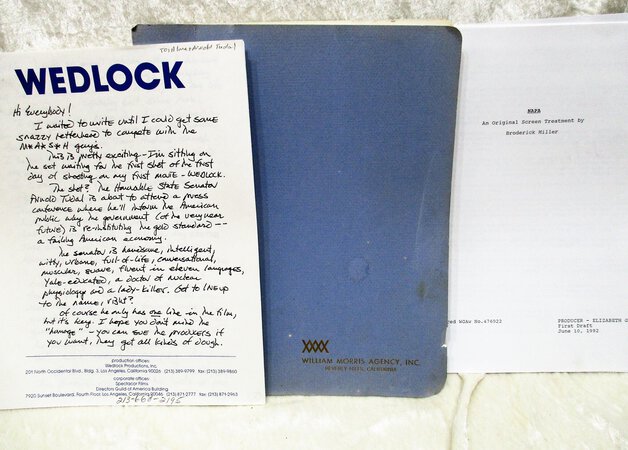 An Original Signed and Inscribed Screenplay, a Handwritten Three Page Letter, and a Screen Treatment, all by the Screenwriter BRODERICK MILLER.

(1) Original First Shooting Draft Screenplay for WEDLOCK by Broderick Miller. The screenplay is dated October 27, 1990 and states First Shooting Draft. The Screenplay is SIGNED, INSCRIBED and DATED by Broderick Miller on the title page: "For ARNOLD & ALMA / Great Friends & / Movie fans! / Love / Broderick Miller / 11-90". The screenplay is bound in WILLIAM MORRIS AGENCY, BEVERLY HILLS covers, bound with two brass brads, photocopied on 8.5x11 inch paper (photocopying was, and still is, how original draft screenplays were quickly printed and sent to the Screenwriter, Director, Actors, and others involved in a film), 103 pages.

(2) A three page handwritten letter. The letter is unaddressed but it was clearly written in 1990 to Arnold & Alma Tudal, owners of TUDAL WINERY, NAPA VALLEY. The letter is full of details about the filming of Wedlock: "This is pretty exciting. I'm sitting on the set waiting for the first shot of the first day of shooting on my first move, WEDLOCK", the hectic pace of his life as a screenwriter: "I had to take my laptop computer and laser jet printer on vacation with me to send in script revisions. It's been exhausting", and gushes about Napa Valley and his new found friends (Alma & Arnold Tudal): "Funny how in such a short time you can feel so warmly about people. It's rare, but it sure happened at your place". The letter ends with: "P.S. Here's a copy of the latest draft - hope you enjoy!"

(3) Original SCREEN TREATMENT for a film titled NAPA. First Draft, dated June 10, 1992. 45 photocopied pages, pages printed on one side only, stapled in the upper corner with a single staple. Likely inspired by Arnold and Alma Tudal, the Tudal Winery, and his time in Napa Valley. It appears that this Treatment never became a Film.

Everything is in generally GOOD or better condition, just lightly used, bright and clean.

Acquired from the estate of Alma Tudal.