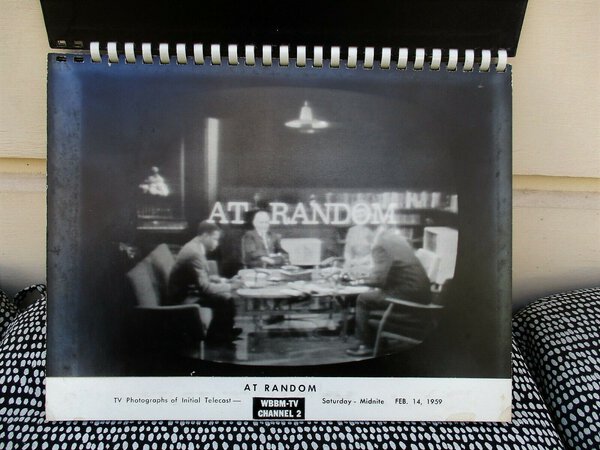 AT RANDOM on WBBM-TV, Channel 2. TV Photographs of the Initial Telecast that was broadcast on Saturday, Midnight, Feb 14, 1959.

Heavy black board covers, plastic spiral bound, holding 6 heavy card stock boards, each 11x14 inches, each board with glossy b&w photographs showing actual television images of the first broadcast of the influential late night talk show AT RANDOM on WBBM-TV Channel 2, Chicago, Illinois. This first broadcast took place on Saturday at Midnight on February 14, 1959. The photographs are on one side only of the six inner boards. The first board has a large tv image that includes Sidney Poitier. The other 5 boards each has 12 tv screen shaped photos of various guests on the set. Four of the boards have unique images, the 5th and 6th boards are duplicates of the 4th board.

Guests on the initial telecast were actors Sidney Poitier and Ruth Roman, singer/actor Sammy Davis Jr., and Senator Wayne Morse, among others.

GOOD condition, some of the plastic spirals are missing and some others are cracked but they still function well, the boards have a bit of edge and corner wear but are overall solid, with images that are bright, clean and clear.

An unusual item related to the history of WBBM-TV Chicago, AT RANDOM, Late Night Talk Shows, and television broadcasting.

******AT RANDOM was a late night talk show seen on Saturdays in Chicago, hosted by Chicago Sun Times columnist Irv Kupcinet. The show was a pioneer program, receiving a Peabody Award and 15 Emmys during a 27 year run that grew to include a 50 station national network. Premiering on Chicago's WBBM in February of 1959, AT RANDOM was one of the few places a serious minded audience could watch Mortimer Adler, the world's foremost Aristolean, exchange views with teamster Jimmy Hoffa. Kupcinet liked odd couplings and would keep watchers awake until the early morning hours, in unrehearsed discussions that ranged from three to four hours. Many Chicagoans got into the habit of going to bed early and rising when the show came on. Authors, filmmakers, scientists, sports figures, politicians, industrialists, and labor leaders were drawn to this frank and full discussion.******